Well, it was probably one of the craziest and most eventful weekends in the history of cryptocurrency.

First of all, over the last few weeks, altcoins experienced a significant drop due to Bitcoin’s skyrocketing price. But we’ve seen that film happen before.

Bitcoin goes up, altcoins automatically drop, and so it goes. We are used to that – old stuff.

But Bitcoin Cash?! What happened to the price?!

I mean, that’s something none of us was expecting.

A currency that none really believed in (including myself) all of a sudden took over Ethereum in value and definitely stole the Bitcoin spotlight.

So what was the reason behind Bitcoin Cash reaching new levels and shaking the market? Here’s a quick overview and some of the possible explanations.

Why Did Bitcoin Cash Go Up in Price? 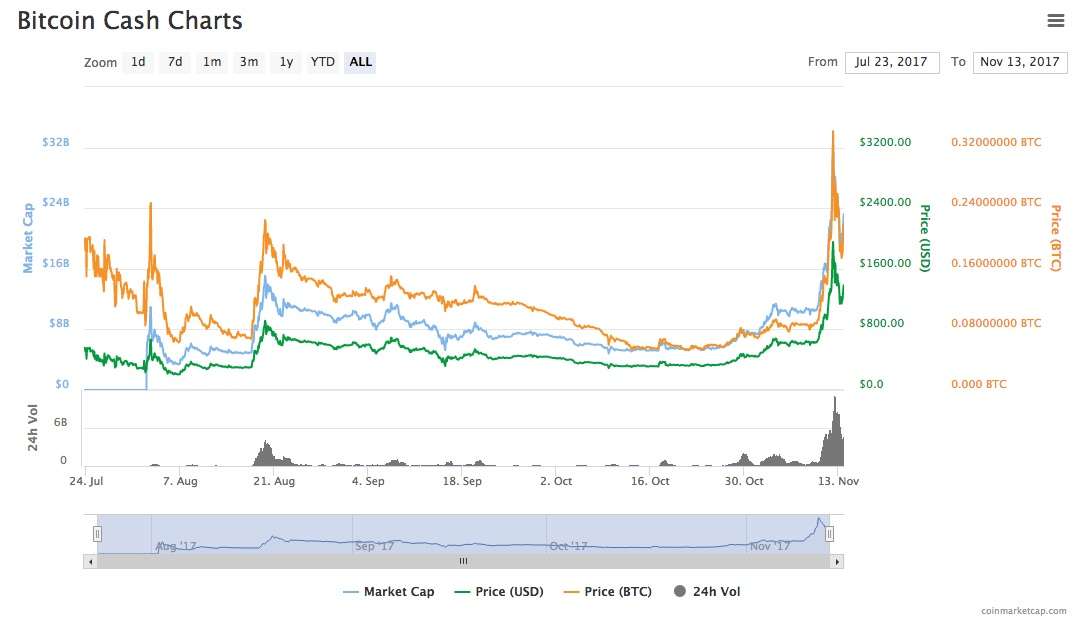 Bitcoin Cash was created during the first stage of a Bitcoin hard fork. Bitcoin has been multiple issues over the last years, including scalability and the transaction time.

To fix the current situation, a group of developers came with a solution – SegWit. The upgrade was supposed to open a window for possible future improvements and increase the block size to 2MB.

Those who didn’t agree with the plan, though, split from the original Bitcoin blockchain and created a new altcoin – Bitcoin Cash.

The new cryptocurrency kept Bitcoin’s protocol, but it increased the block size to 8MB – a drastic jump from the current 1MB.

However, ever since Bitcoin Cash was created in August, it didn’t gain much attention. The price ended up way below the market expectations and cryptocurrency experts all over the world raised an issue of the future hackers’ attack.

The considerable increase in a block size could invite malicious behaviour into the network and make it easier to hack the data.

Nonetheless, Bitcoin Cash has been living its own life in the background until Bitcoin was supposed to go through the last stage of the SegWit upgrade.

Unfortunately, the Bitcoin network could not agree, and the fork was cancelled on November 8. Bringing the same a lot of concerns over the future of Bitcoin.

Here are the charts from CoinMarketCap indicating the volatility of both Bitcoin and Bitcoin Cash: 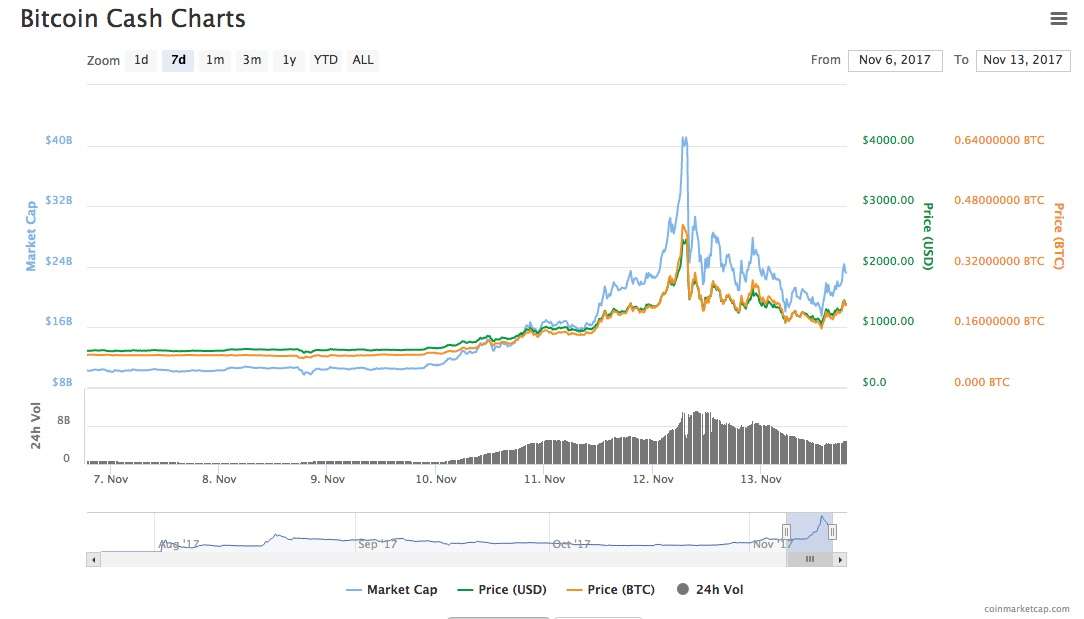 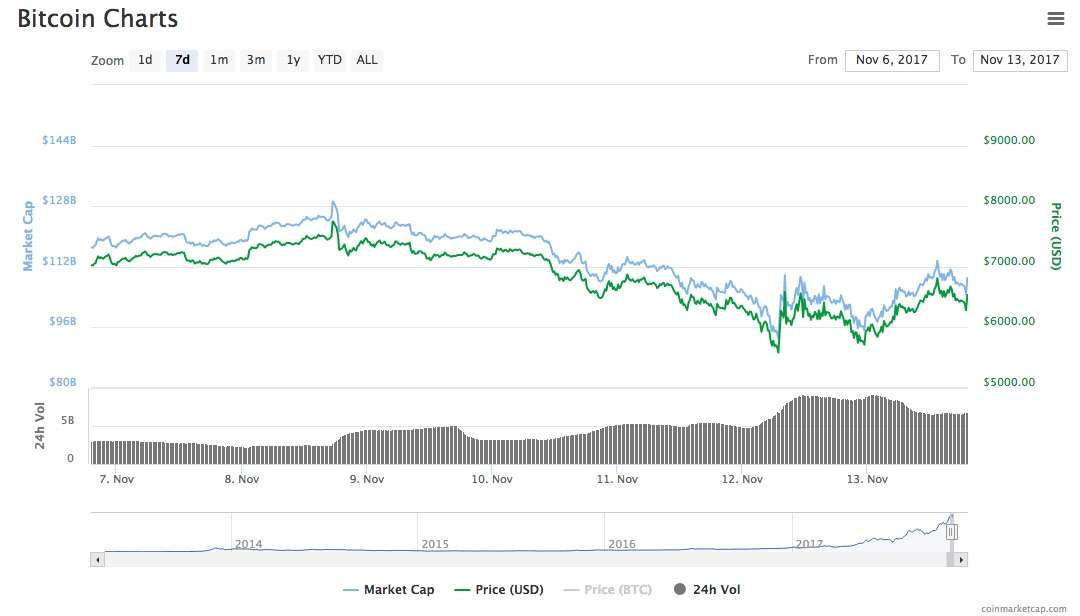 The Truth Behind Bitcoin Cash Price

Before you get too excited – Bitcoin Cash isn’t the best investment that you have just missed, and here are the reasons why.

There are several theories to why Bitcoin Cash spiked so much in price:

The most reasonable, and popular explanation seems to be the fact that Bitcoin Cash was a victim of a ‘pump-and-dump’ scheme.

Detractors suggested that Bitcoin Cash was manipulated by Chinese miners and others who spotted an opportunity to cash out during the Bitcoin turmoil.

Whether that’s true or not, we will never find out. But Bitcoin Cash already resembles some of the prevalent traits of the ‘pump-and-dump’ scheme.

Ultimately “the pumpers will cash out” says @excellion pic.twitter.com/mhLfDJ0m8O

The volatility of Bitcoin Cash could have been caused by cryptocurrency exchanges deliberately manipulating the price.

The CEO of Chainanalysis, a company providing forensic analysis of digital transactions, revealed that the weekend resulted in high trading fees:

So while crypto markets are volatile the exchanges are cashing in.
Back of the tweet estimates:@bitfinex made ~$7m in trading fees in last 24hrs@bitfinex over $1bn traded in $BCH / $USD alone
Total Trading volume $23bn in last 24 hrs

Another speculative theory is that SegWit2x supporters turned to Bitcoin Cash as they had no other choice.

Since Bitcoin once again confirmed its problems with consensus, and frankly, the ability to get things done, dissatisfied investors had nowhere else to turn but Bitcoin Cash.

Jacob Eliosoff, the manager of Trevi Digital Assets Fund, admits that is natural for SegWit2x supporters to turn to their version of Bitcoin:

” [Bitcoin Cash backers] have nowhere to turn but BCH. It’s not surprising that SegWit2x’s loss has been Bitcoin Cash’s gain.”

The Future of Bitcoin Cash

Bitcoin Cash will undoubtedly lose in value over the next few days. Even at the time of writing this article, the price continues to drop.

However, there is a more significant implication to what happened last weekend.

Bitcoin Cash can seriously harm the original Bitcoin and its price. Bear in mind that Bitcoin Cash is not Bitcoin’s replacement.

There is only one Bitcoin, and there will only ever be 21 mln Bitcoins. Any other coin is merely an altcoin.

Bitcoin Cash still cannot be traded on some of the major exchanges, e.g. Coinbase, not to mention its capability of storing a value and being accepted as a method of payment.

The multiple scenarios and uncertainty about the real reason behind Bitcoin Cash price to rise, only show that Bitcoin Cash is not perceived as a reliable and long-term investment, but rather an opportunity to make a quick profit and disturb the market.

Given the incredible volatility of cryptocurrency markets, it’s almost impossible to predict what will happen next, but we are likely to go back to predictions of Bitcoin reaching $10,000 soon.

Hopefully, the prospect of Bitcoin Cash dethroning the original Bitcoin will be over soon, and we will get back to looking at Bitcoin Cash as an altcoin.

While Bitcoin is still facing numerous issues and is far away from solving them all, Bitcoin Cash and what happened to its price are probably not a solution.