Bitcoin went through its first hard fork in August this year which resulted in creating a separate altcoin – Bitcoin Cash.

However, the issue of what is the ideal Bitcoin network is still pressing, with developers around the world not being able to reach an agreement.

On October 25, Bitcoin will go through another hard fork and will likely result in another altcoin – Bitcoin Gold.

Here is an update on the Bitcoin Gold Hard Fork with all the details you need to be able to protect your funds and what you have to do to claim the new cryptocurrency.

One crucial thing you have to remember, though, is that there is only one Bitcoin, created in 2009 with just 21 million in existence. Any other altcoin that has ‘Bitcoin’ in its name is merely a different cryptocurrency and has nothing to do with the original Bitcoin. These ‘Bitcoin’ altcoins are neither related to each other in the same way as Dash has nothing to do with Ethereum and so on.

And in case you are worried or concerned about the future of your Bitcoins – there is no need to. As long as your Bitcoins are securely stored on a wallet outside of an exchange, you are safe and so are your Bitcoins.

What Is Bitcoin Gold?

The most significant difference between Bitcoin and Bitcoin Gold is the proof-of-work algorithm.

Currently, Bitcoin uses an algorithm (SHA-256) that is dominated by powerful Chinese ASIC miners. The robust equipment is unaffordable for individual miners, which caused a centralisation of Bitcoin mining.

Bitcoin Gold, on the other hand, will switch to the Equihash algorithm which can be mined by more affordable graphics cards (GPUs).

The core idea behind the Bitcoin Gold fork is to make cryptocurrency mining decentralised, as initially intended.

However, there is a significant concern behind the true intentions of creating Bitcoin Gold – the founder is Jack Liao, the CEO of LightningASIC. It’s a Hong Kong-based company that produces cryptocurrency mining software that currently holds a backlog of over 900 GPU-mining units.

Should Bitcoin Gold become successful and take share from Bitcoin mining, LightningASIC would benefit from selling the equipment and mining the new cryptocurrency themselves.

Even though Bitcoin Gold will be an altcoin, likely to be sold on major exchanges, its launch is motivated by mainly financial aspects.

Bitcoin Gold miners are committed to keeping the supply at limited 21 million and are considering premining 1% of Bitcoin Gold themselves.

The plan is to fork from Bitcoin on October 25 – that does not mean that Bitcoin Gold will be launched on that day. Firstly, the Bitcoin blockchain will be frozen to allow Bitcoin Gold chain on that day, and the first few blocks should arrive a few days later.

The most recent date of Bitcoin Gold launch is the beginning of November, meaning the new network will stay block-less for about few weeks.

Why Does Bitcoin Need Another Fork?

The more Bitcoin became popular, the more demand it has created. Naturally, when Satoshi Nakamoto created Bitcoin for the first time, nobody was expecting it to become such a success.

Nowadays, Bitcoin cannot cope with a number of transactions, and it can take up to few hours to process one transaction. On the top of that, there is a centralisation issue with Bitcoin mining pools taking over the entire Bitcoin mining process.

The discussion about a possible solution has been circulating for over two years, and the dispute created four different groups around ‘Bitcoin’ altcoins:

Why does Bitcoin need so many forks and solutions? Purely because as many developers and miners are out there, that many ideas will come through to solve Bitcoin’s scalability issue.

Bitcoin is well-known for the lack of stability and the lack of agreement between developers. While the chain split will affect the price, it will likely go back up in a matter of days. You can find more detailed explanation of different Bitcoin forks in our recent update.

A chain split can be both beneficial and dangerous to a cryptocoin. On the one hand, it can result in creating a coin that solves all of the pending issues. But on the other side, it can weaken the original currency.

In case of Bitcoin, the latter is possible to happen. After the first fork, Bitcoin’s price skyrocketed, but if one of the created altcoins proposes a better network, most investors will switch. We are already experiencing a rapid drop in price due to many investors selling Bitcoin in panic.

Bitcoin may not have needed all four forks to happen, but there was a need for an action to occur. The biggest one is about to happen in November – the SegWit2x upgrade is what has caused initially a Bitcoin turmoil. But we will not know until the end of the year, what is the future of Bitcoin and which one of its altcoins will become a success.

Bear in mind, that the SegWit2x fork is described by the developers just as an upgrade to the existing network and they do not plan a new altcoin creation. If that is going to happen, the market will be left with Bitcoin, Bitcoin Cash and Bitcoin Gold.

How to Claim Bitcoin Gold?

Any Bitcoins (BTC) that you currently have will grant you an equal amount of Bitcoin Gold when the fork occurs. This does not, however, apply to the exchanges wallets. Hence, you must transfer your Bitcoins to a secure wallet.

No major exchanges or wallets have made a statement about trading Bitcoin Gold yet. Exchanges will likely open to Bitcoin Gold after its official launch, which will be at the beginning of November.

Once there are available wallets for Bitcoin Gold, the entire process will be similar to the Bitcoin Cash split.

However, the Bitcoin community warns against claiming Bitcoin Gold or selling it too quickly. Bitcoin situation will become more evident after the fourth fork in mid-November.

Some wallets will split the two coins for you, while some will stay as Bitcoin. It is too soon to say which wallets will do so, but exchanges will likely set up coin splitting services. In this scenario, you would have to send BTC to an exchange, and it will credit your account with Bitcoin Gold.

You do need to, however, be aware of all the scams that are related. BiteMyCoin has found multiple complaints across different forums of scammers who promise Bitcoin Gold in exchange for a private key. And you should never share your private key with anybody.

How to Protect Already Existing Bitcoins?

One of the major concerns at the moment is that there is no replay protection for neither Bitcoin Gold nor the future Bitcoin after the SegWit2x fork.

Meaning, you can accidentally send Bitcoin Gold instead of Bitcoin and vice versa.

If you want to protect your Bitcoins, follow these few rules:

Should I Be Concerned About Bitcoin Forks? 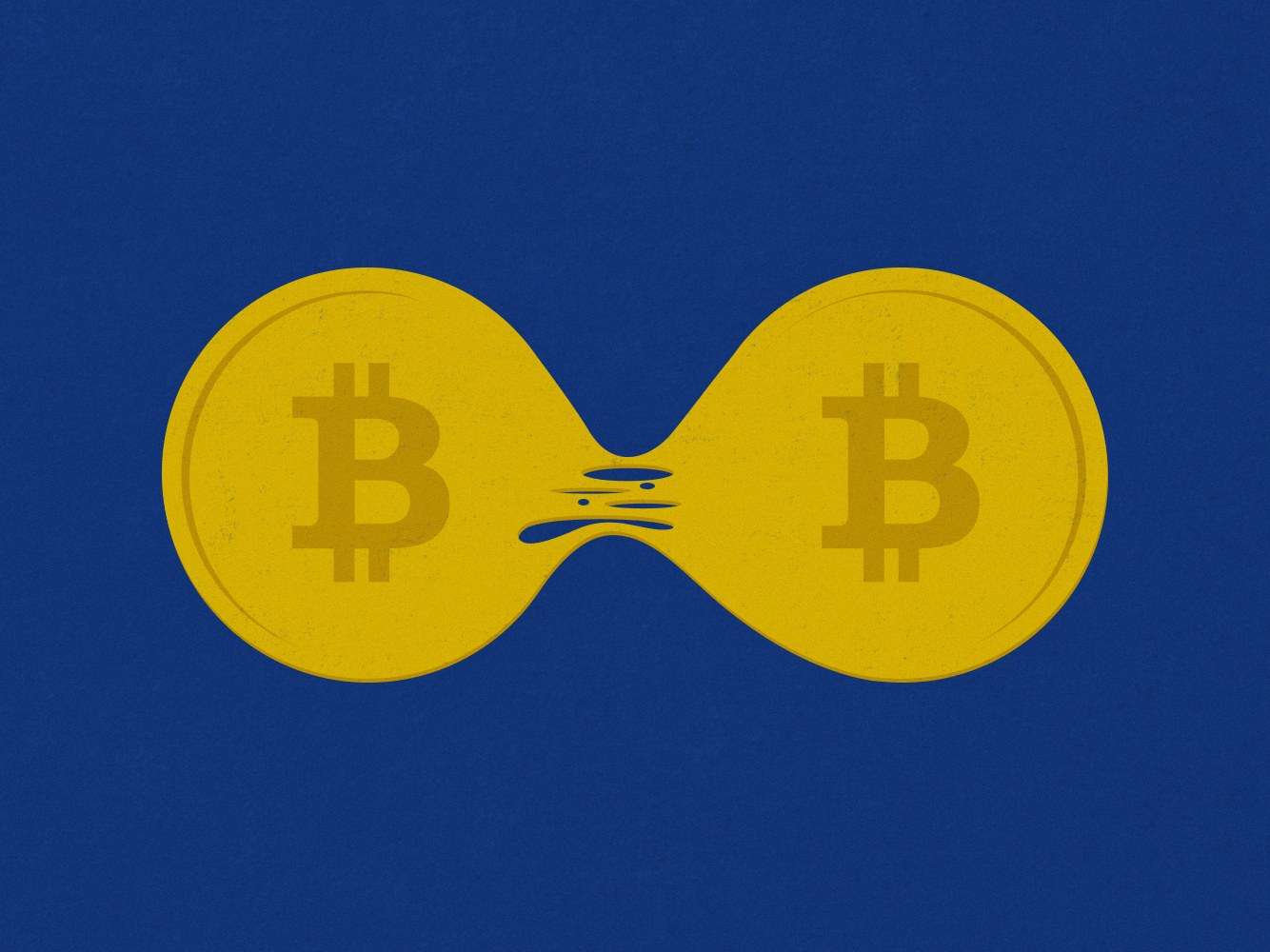 While nobody knows what is going to happen to Bitcoin in a month or how many Bitcoin alternatives we will have, there is no need to worry. Unfortunately, Bitcoin upgrade is not as smooth as the recent Ethereum Byzantium hard fork, but nonetheless, you do not have to be worried.

As long as your Bitcoins are stored in a secure wallet, then nothing will happen to them and you will still own as much as you do.

If you are concerned about the value of Bitcoin after all forks, you have to be prepared for a drop. When Bitcoin Cash entered the market, Bitcoin’s price did not fluctuate too much and a few weeks later it skyrocketed to an all-time high of almost $6,000.

Bitcoin Gold hard fork will unlikely affect the price drastically. The fork itself is not as such needed and there is a serious doubt of how much the new altcoin will be actually worth.

For the time being, hold onto your coins, do not sell them and remember:

What is your survival strategy for all of the upcoming Bitcoin forks? Let us know in the comments below!