Cardano Coin (ADA) has been the latest cryptocurrency to grab attention.

Since then Cardano has waltzed into the top ten of the cryptocurrency charts and is predicted to flourish in 2018.

ADA might have dipped since Christmas, but which cryptocurrencies haven’t. After the initial excitement of digital coins being floated on the global stock market, there has been a noticeable drop off of investors.

But don’t let the downturn fool you. People are just biding their time to see how Bitcoin Futures affects the cryptocurrency market.

Cryptocurrency is still very much in the mind’s of professional traders and casual investors.

If you’re contemplating getting in on the action, this article gives you the low-down on the Cardano Coin and what you have to know to decide whether this is the right coin to back.

What Is Cardano Coin?

There are so many choices of cryptocurrencies on the market; it’s difficult to know which coins to invest in.

Cardano is an ambitious project.

However, given the coin has been heavily researched by a global team of scientists in the blockchain space the founders are confident ADA has more to offer than its competitor.

Cardano is designed using data that has been gathered from studies of what makes cryptocurrencies successful.

Furthermore, one of ADA’s co-founders is Charles Hoskinson, a co-founder of Ethereum, the coin that is second only to Bitcoin in the crypto market. All in all, there’s a good chance of Cardano clearing the hurdles.

Like Ethereum, Cardano deals with smart contracts – a digital system that will enable people to make legally-binding contracts such as buying goods and services, property, shares or anything else that requires transparency.

As a result, blockchain technology will do away with the need to hire middlemen like lawyers and banks.

Cardano is not attempting to overhaul the banking and legal industry.

The team is looking to improve it by building a technology that provides a solution for end-users and regulators.

In essence, blockchain means the puppeteers of law and finance will not be able to manipulate the system and create roadblocks on a whim.

ADA is looking to find the middle ground that, all in all, creates a fair and competent system.

Like all other blockchain developers, the shift of power will be decentralised. What Cardano has achieved is to find a solution that guarantees privacy and security while also ensuring parties provide a “Proof of Stake.”

The architecture of the technology is being developed in two layers.

This means businesses can separate the accounts ledger from the reason accounts are being moved. It also makes smart contracts more flexible and secure while at the same time eliminating the prospect of fraud.

It is the layered architecture and advanced features that marks Cardano as a coin to watch.

The primary focus of Cardano is security.

How Cardano achieves this is to run operation in two layers; CSL which uses a proof-of-stake consensus to confirm transactions and CCL which provides evidence that the transaction is not illegal.

The first layer, CSL, involves parties agreeing to the transaction and making the payment with the ADA token.

This registers the smart contract together with legitimate clauses that support future trade. It also works in the same way as other peer-to-peer blockchain transactions.

The feature that elevates Cardano above its competitors is the second layer. CCL acts as the balance ledger and contains information about why the transaction occurred and why it should be allowed to happen.

Ledgers will be able to interact with the CSL without having to share private data about the parties.

The technology uses a protocol known as the Ouroboros Proof-of-Stake which allows more nodes – computers in the blockchain – to verify transactions.

The Cardano team has also created an open-source wallet, they have named the Daedalus Wallet.

Although the digital wallet only supports ADA at the moment, the long-term plan is to make the Daedalus wallet compatible with multiple currencies which can be freely transferred to supporting exchanges.

What Caused a Sudden Price Spike For The Cardano Coin 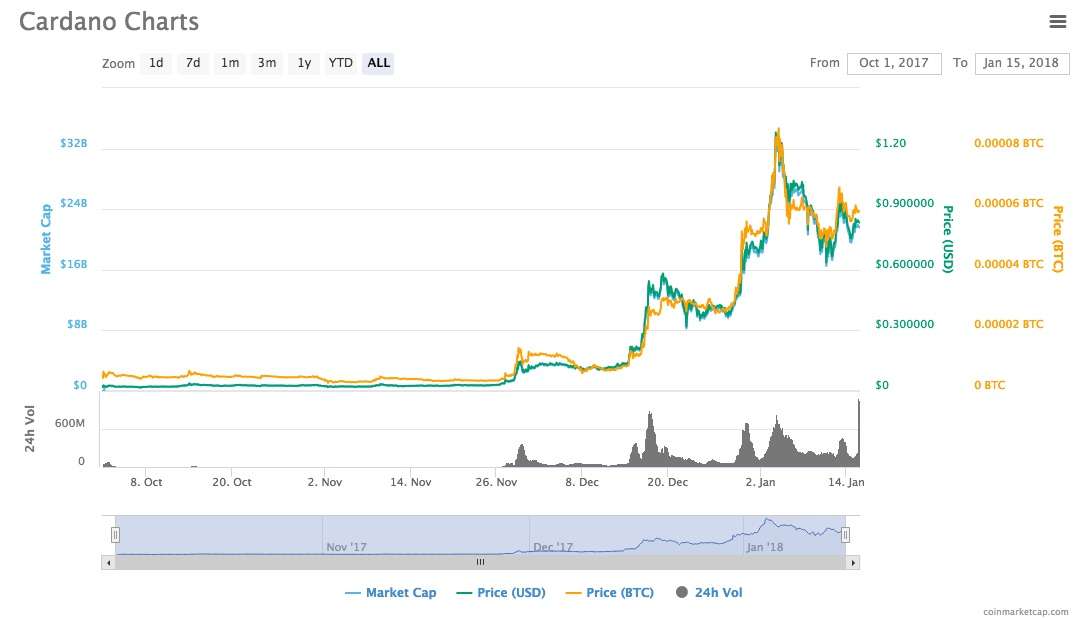 There have been several reasons for Cardano’s surge in price.

Floating digital coins on the stock market in December was a major contributing factor for several cryptocurrencies. But Cardano had already started to make an impact before the mid-December upsurge.

ADA was priced around $0.6 when it enjoyed its first bullish run.

The price was low enough to invest in, and the technology shows more potential than most other contenders floating a low price.

Cardano is also predominantly owned by Japanese owners – giving it the nickname, the Japanese Ethereum.

But it is probably the success co-founder Charles Hoskinson had with Ethereum that boosts the confidence of investors. Together with South Korea, Cardano has accrued 90% of its price-hike in the Asian markets.

The Future of Cardano Coin

Although Cardano does not want to reinvent the wheel, they do intend to sure up the spokes and give the global economy more stability – especially in third world countries where corruption is at a premium.

The Cardano team has big plans for the future, but it’s difficult to predict how the digital currency will fair – principally because the team will be stepping on the toes of some very influential people that control how vital systems are run.

The coin recently took a hit when the South Korean government announced plans to rein in trading on cryptocurrencies.

However, although a bill is being prepared, officials may have to back down.

China issued a ban last year which was subsequently lifted, and South Korea are likely to face the same pressures. A turnaround will be good news for ADA.

There is better news from Cardano’s other firm hold.

Since the Japanese government made bitcoin a legal currency, businesspeople in their 30’s and 40’s are driving the crypto market.

Cardano plans to capitalise on this chain of events by installing ATM’s throughout the country in 2018.

This branding trait will undoubtedly increase their coins value given Japan is one of the world’s leaders in the acceptance of cryptocurrency.

What you do have to know about Cardano Coin, though, is it will be one of the big movers in 2018!

Cardano ADA is currently available to buy and sell on Binance.