Want to promote your new ICO-based business or introduce you company new cryptocurrency services? You will have to do it without Facebook.

The social network Facebook banned cryptocurrency ads related to Bitcoin and any other cryptocurrencies, especially ICOs.

Under Facebook’s new policy, no ads from cryptocurrency exchanges or initial coin offerings will be allowed. The ban will affect not only Facebook but also Instagram.

Unfortunately, not only scammers will be banned, but also legitimate businesses that operate within the correct legal framework.

Since the news stirred digital marketing space, we’ll be looking at why did Facebook ban cryptocurrency ads, what are the consequences of it and what other advertising options are left for crypto-businesses. 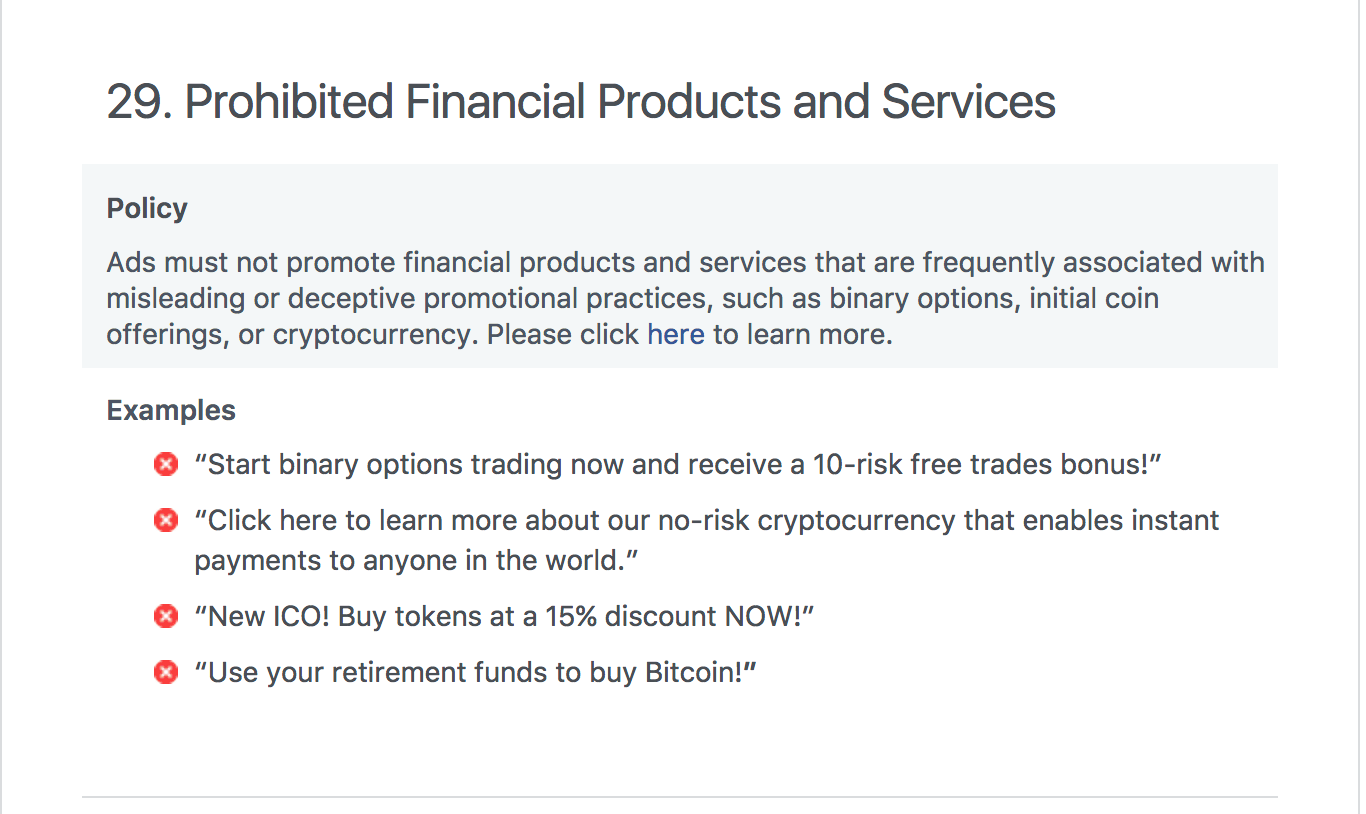 The new Facebook rule will prohibit “promoting financial products and services that are frequently associated with misleading or deceptive promotional practices, such as binary options, initial coin offerings, and cryptocurrency.”

Since cryptocurrency become such a hit issue, plenty of deceptive companies have started using cryptocurrency as buzz words just to lure people to their scam idea, causing the same significant financial losses.

According to the statement made by Rob Leathern, one of Facebook’s ad tech directors, the rule is intentionally broad, and Facebook is working on the new strategy to:

“better detect deceptive and misleading advertising practices. We will revisit this policy and how we enforce it as our signals improve.”

But, not only ICOs and get-rich-quick from crypto ads are banned.

Of the multiple places on the web where a person can learn about cryptocurrencies, Facebook is possibly the worst.

Facebook users are known for being a less sophisticated cryptocurrency audience, likely to quickly invest in anything that promises quick returns, such as BitConnect.

So on the plus side, anybody who is promoting and encouraging cryptocurrency investment won’t be allowed to use Facebook ads either. That means that so-called “crypto-geniuses”, such as James Altucher, won’t be seen anymore in the Facebook ads.

Yes, you won’t be seeing James Altucher on your Facebook feed anytime soon.

The ban is not as comprehensive as Facebook’s, but Google has already created policies to help with finding abuse in cryptocurrency-specific ads. Currently, the strategy is focused on malicious cryptocurrency mining using the computing hash power without a consent.

Although no official announcement has been made, a Google spokesperson provided The Fast Company with a statement:

“Mining cryptocurrency through ads is a relatively new form of abuse that violates our policies and one that we’ve been monitoring actively. We enforce our policies through a multi-layered detection system across our platforms which we update as new threats emerge.”

What Are Other Advertising Options For Cryptocurrency Businesses?

Facebook is undoubtedly one of the most popular advertising platforms.

It not only gathers approximately 2.07 billion active users per month, but it also collects over $1 billion from advertising.

Removing Facebook, and potentially Google, from a business’s advertising plan, poses one big question: How can I market my cryptocurrency-related business?

In the past, most ICOs and crypto businesses heavily relied on Social Media advertising and organic growth. While it’s unlikely the ban will stay on the same terms forever, we still don’t know when Facebook will propose new rules.

You can still use platforms such as Twitter or Reddit, but you will only succeed if you do it organically and after your business becomes already known.

And in the meantime, you still have to promote your business, making sure that the audience is familiar with your product. Here’s what you can do:

Online cryptocurrency hubs, such as BiteMyCoin or CoinTelegraph, are probably your best option going forward.

The ad placement on this websites does not involve Google. Hence they can place ads of their choice.

What’s more – these portals also have a large following on Social Media and a hefty subscription list. Without any risk, they will be able to promote your business to their audience organically.

There’s also another advantage of saving your money on Facebook – you can go directly to the audience that is interested in cryptocurrency-related business or investment.

While using Facebook or Google, the chances are that the majority of people is not interested in your product. Hence, you are spending money on an audience that will probably never even visit your website.

Going directly to cryptocurrency hubs, you are increasing your chances of engaging genuine investors.

Marketing a crypto-business has become extremely hard due to fierce competition.

Even if you have a large sum to spend and know how to use the Internet, your success rate probably won’t be that high.

Marketing agencies, such as ANCHOVY. Or Belkin Marketing, are the experts in knowing how to beat the competition and make your product stand out.

They will also know how to go about specific regulations, especially on Social Media, and how to promote your business without compromising it.

An ICO Calendar is one of the best ways to promote your ICO is by using an individual ICO calendar site.

There is a range of sites out there where you can upload the full details of your ICO including the date it will go live. From there, bloggers, journalists and crypto-enthusiasts have an increased chance of finding your ICO and being able to include it in their work.

Make sure to place information about your ICO on as many calendars as possible – examples of such sites include coinschedule.com, coingecko.com or ICOcrowd.com.

The Future of Cryptocurrency Advertising

The truth is that until the cryptocurrency and ICO market becomes regulated, the ways of promoting a crypto-based business will become even tighter.

For Facebook, the move is the latest attempt to protect the integrity of its advertising platform, which over the past 12 months has been under fire for enabling Russian propaganda and other inappropriate content.

But judging by the tighter cryptocurrency regulations form Asia, and around the world, no advertising platforms want to be accused of promoting scams or fraudulent services.

The question here is not about whether cryptocurrency will be entirely banned in the future or whether it will disappear.

That will probably not happen.

The real concern is focused on creating clear laws that can protect investors. Until this is in place, it will be hard to promote an ICO or any other virtual currency business.

Facebook’s ban, unfortunately, hurts legitimate businesses as well, but the company will likely come up with less strict policies soon.

Mark Zuckerberg, Facebook’s chief executive, has recently expressed an interest in digital currencies. He’s currently studying how to introduce cryptocurrency to his company.

On the top of that, Facebook’s board of directors includes two investors — Marc Andreessen and Peter Thiel — their firms have been prominent crypto backers. Facebook Messenger boss, David Marcus, is also on the board at the famous crypto exchange Coinbase.

The Facebook embargo on crypto add will only benefit the cryptocurrency community.

Scam coins and ICOs won’t be able to advertise in front of a passive Facebook audience, and the definitely won’t survive sharp-tongued platforms such as Twitter or Reddit.

It’s a matter of waiting for new policies to be introduced and making sure that advertised businesses are legitimate.

In the meantime, you can start targeting an audience that is genuinely interested in what you have to offer.

For more information on cryptocurrency advertising, read our article on How To Promote an ICO or visit our Advertising page.