Ripple released a mobile app for instant payments within Japan.

Back in December 2017, Japan started testing a consortium of payment cards industries, for including blockchain technology.

Today, after three months, they finally announced the smartphone payment application, “MoneyTap“, which is going to be benefitting from Ripple’s blockchain technology.

MoneyTap is going to be the first app ever which is going to offer something like instant payments while using blockchain technology and being used by so many different banks in Japan at one time.

For using MoneyTap, all you need is a bank account and a phone number or a QR code.

„We are proud to leverage Ripple´s blockchain technology through our new mobile app, MoneyTap, to improve the payment infrastructure in Japan…, together with the trust, reliability and reach of the bank consortium, we can remove friction from payments and create a faster, safer, and more efficient domestic payments experience for our costumer“

The goal of the app is it to provide every customer of the bank consortium with the access for instant payment at every time, every day of the week.

Usually, domestic payments are limited to weekdays between 8:30 am and 3:30 pm in Japan.

It is also going to lower all of the current costs for domestic money transfer drastically.

MoneyTap is going to be released in autumn of 2018, three of the banks’ consortium members in Japan are Suruga Bank, Resona Bank and SBI Net Sumishin Bank.

The Japan bank consortium consists of 61 banks which are covering more than 80% of all the banking assets in Japan. As we can see the majority of Japan is going to be benefiting from MoneyTap. 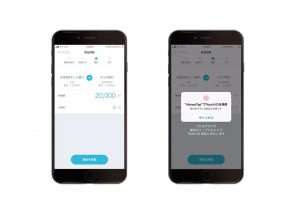 Ripple has always set their main focus on offering solutions for cross-border payments of all kind.

The blockchain technology has a lot more to offer than solving the domestic payment issues once you realise its potential.

For the future Ripple wants to make it possible that money is going to move as fast as information, which means immediately.

Ripple released a mobile app for instant payments within Japan as the first one worldwide and knowing Ripple; there will be more to follow.

If you’re still not sure about Ripple, read our guide to What Is Ripple Coin.