The last 12 months have been pretty exciting when it comes to cryptocurrency. We have seen investing in crypto going mainstream, the birth of new exchanges and trading platforms, and of course the emergence of new coins.

There are now well on the way to 2000 different cryptocurrency coins available to be invested in, with more and more being created every week.

The first of these was Bitcoin back in 2009 by Satoshi Nakamoto, and since then, it, and those that have followed it have revolutionised the world of finance.

We all know about Bitcoin, Ethereum, Ripple, and Litecoin, but what about some of the lesser known coins? Many investors are looking for the next Bitcoin – a coin that is going to skyrocket in price over the next few months, but with so many coins on the market, many don’t know where to start.

So what are the best cryptocurrency to invest in 2018? Here are five of our hot tips! 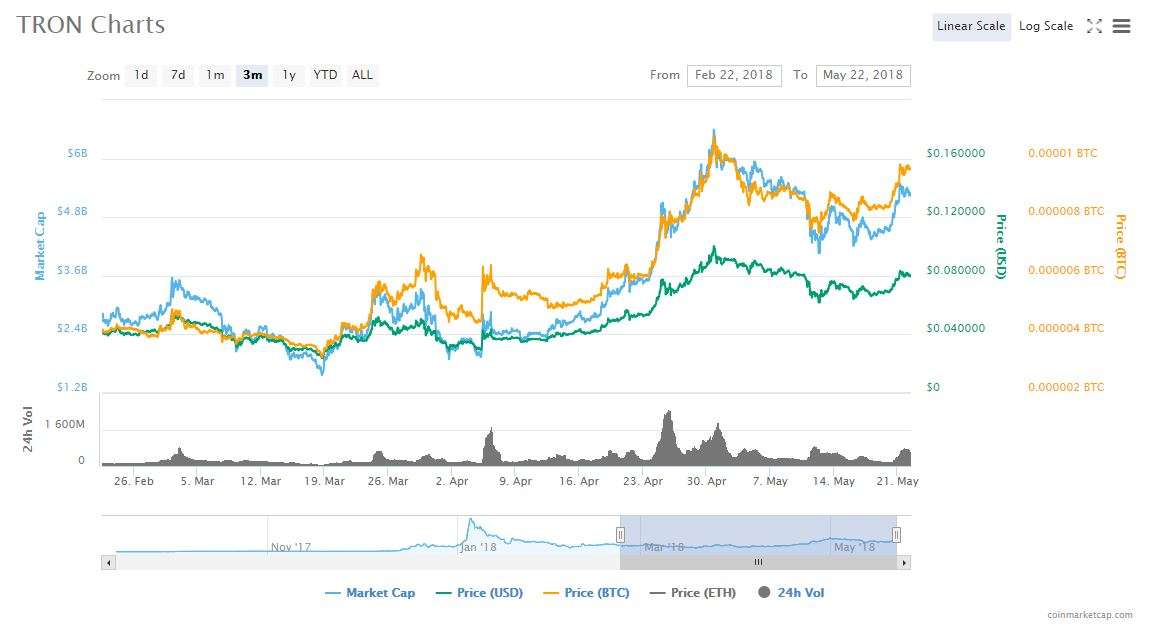 Tron is a blockchain based cryptocurrency which is decentralised and designed to be a content distribution platform for the world of digital entertainment. In April 2018, the public chain platform came online, but the primary network is set to go live towards the end of June.

Founded in September 2017 by Justin Sun, TRON aims to create a free, global entertainment content ecosystem which creators can use to publish, store, and have ownership over their content. They can then interact directly with customers in a completely decentralised manner.

They managed to raise an impressive $70 million during its ICO fundraising stage, and the native token of the platform is called Tronix (TRX). The coin itself has been trading since September, and it reached an all-time high of $0.30 in January of this year. Its market cap has fluctuated between 1.5 billion an 3.5 billion over the last few months.

The platform will provide developers with an easy way to publish content, and it is also one of the few blockchain networks which allow easy publishing without restrictions. It is versatile and useable and offers a solution to an issue that affects many.

The value of TRON against the USD has been rising steadily, and within the next five years, it is expected to reach a value of over $1 per coin. While it has a long way to go to meet the runaway success of Bitcoin, it offers investors a steady increase in value in an otherwise unstable market.

Once the platform is launched in June and the uptake of usage increases, numbers will rise exponentially. An increase in the number of developers that will use the platform will also result in a marked appreciation of the coin, and this is why it is a good option for investors this summer. 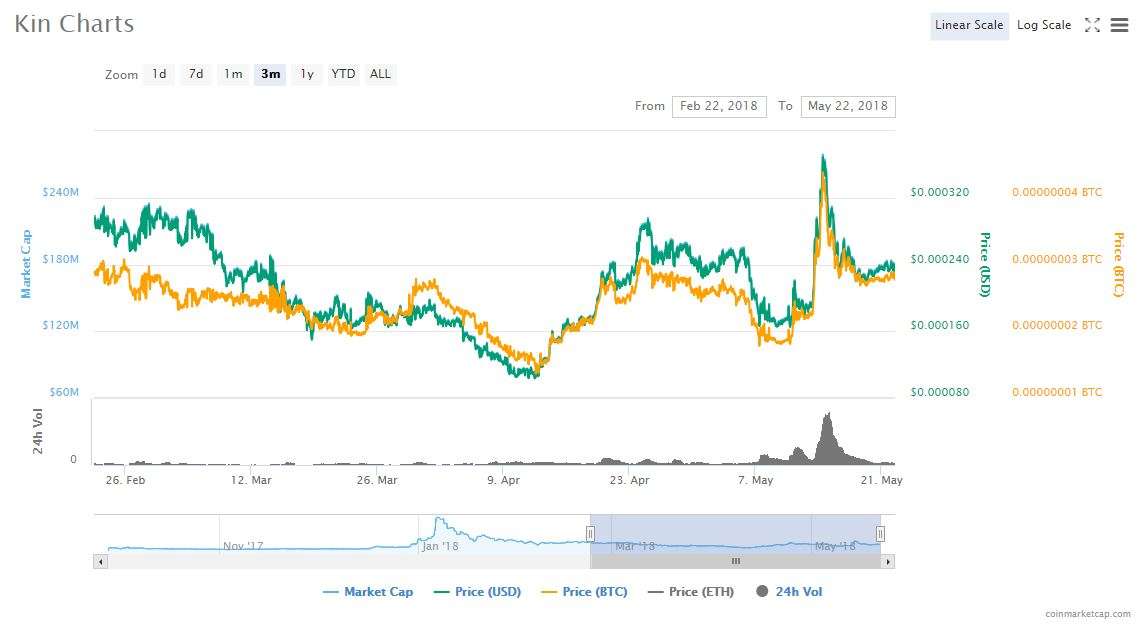 KIN is a decentralised coin that uses the Ethereum network. Created by Kik in September 2017, its token distribution event raised over $98 million from 10,000 investors. The idea behind the token is to provide value transfers for digital services such as gaming apps and social media platforms.

Initially launching on Kiks messenger platform to make use of its 15million monthly users, it offers a daily reward to developers of digital services that are based on the network. When a user creates a digital service that utilises Kin, a daily reward is paid to them in Kin an the amount of Kin that service is paid on its overall contribution to the ecosystem.

Developed by the Canadian social media company, it is currently and ERC-20 token, but upgrades are being continuously made so that it can be integrated to the Kik app to build an atomic swap with the Stellar token. Kiks popularity means that the coin has a significant headstart regarding following and reputation and like many other cryptocurrencies, it is entirely anonymous.

Through its integration into the social media platform and the way it will be marketed at users means that it is expected to grow exponentially over the next few months. Then in May 2018, the development team of Kin announced that they would be launching their blockchain that is base on the design of Stella. Once this goes live, they will have succeeded in creating a hybrid ecosystem that will be able to offer a much quicker and more scalable transaction system to its users.

At the moment, single kin is worth around $0.00016, and its market capitalisation is approximately $125 putting it at number 133 on Coinmarketcap.

While this may not sound too impressive, with the imminent launch of its platform, investors are starting to sit up and take notice. It is tipped to increase in value drastically over the coming months, and it is one to watch for those looking for a new coin to invest in. 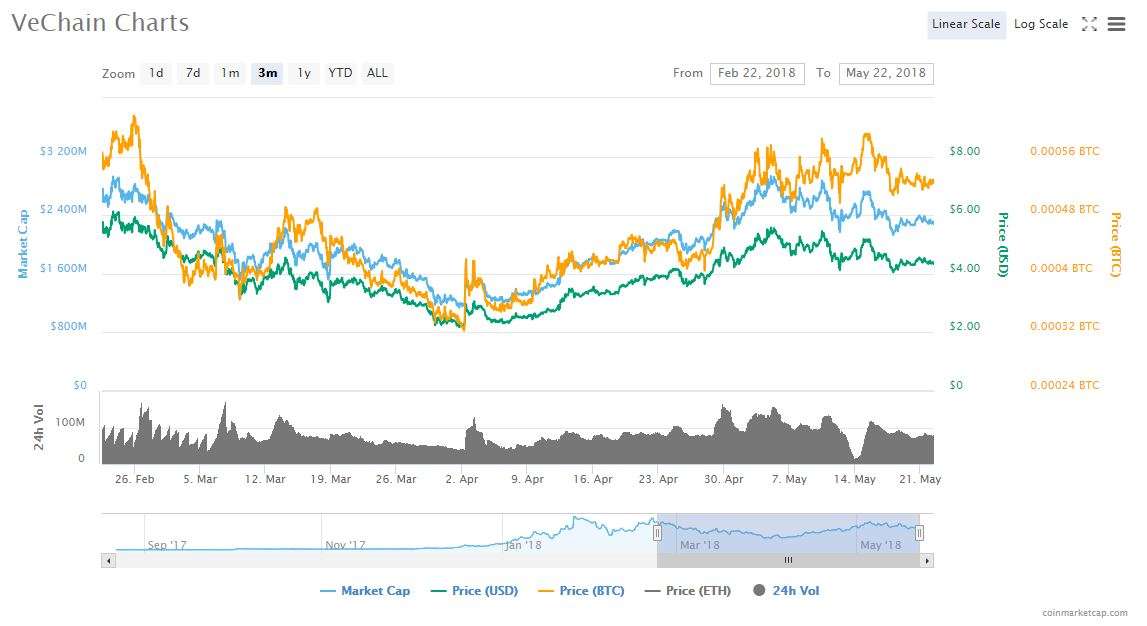 VeChain and its cryptocurrency VEN is a blockchain based platform that works within the financial services, smart contracts, and supply chain sector. VEN s the first crypto coin to have created a disaster recovery plan, and it was also the first to join forces with the Chinese government.

VEN began back in 2007, but the coin itself was not launched until 2015. In late 2016, it began collaborating with companies that operate within the spheres of luxury goods, logistics, agriculture, and food, as well as state administration.

After establishing a presence in Shanghai, Paris, Tokyo and Singapore, they made a deal with the Chinese government and became the blockchain partner of the regional government of Guiyang.

They then started to develop a range of services to find a solution to the Chinese tobacco monopoly, and they also joined forces with PwC, BMW, Michigan State University, and Oxford University- giving some serious credibility to the project.

Then in August 2017, VEN began trading, and it became the 16th most valuable crypto coin in the world as of January 2018. It then established a new platform, rebranded as VeChain Thor, and moved its focus to the Internet of Things with Jim Brever providing advisory services.

During the first three months of 2018, VeChain was one of only 20 cryptocurrencies that did not show any negative returns and instead showed a gain of 28%. By April 2018 it was the 17th largest cryptocurrency in the world.

This is a coin to watch- asides from the fact it has held and increased on its value, the fact that they have partnered with so many big names is a refreshing vote of confidence in an otherwise slightly unstable world. Big things are expected of this coin, and 2018 is set to be an exciting year. 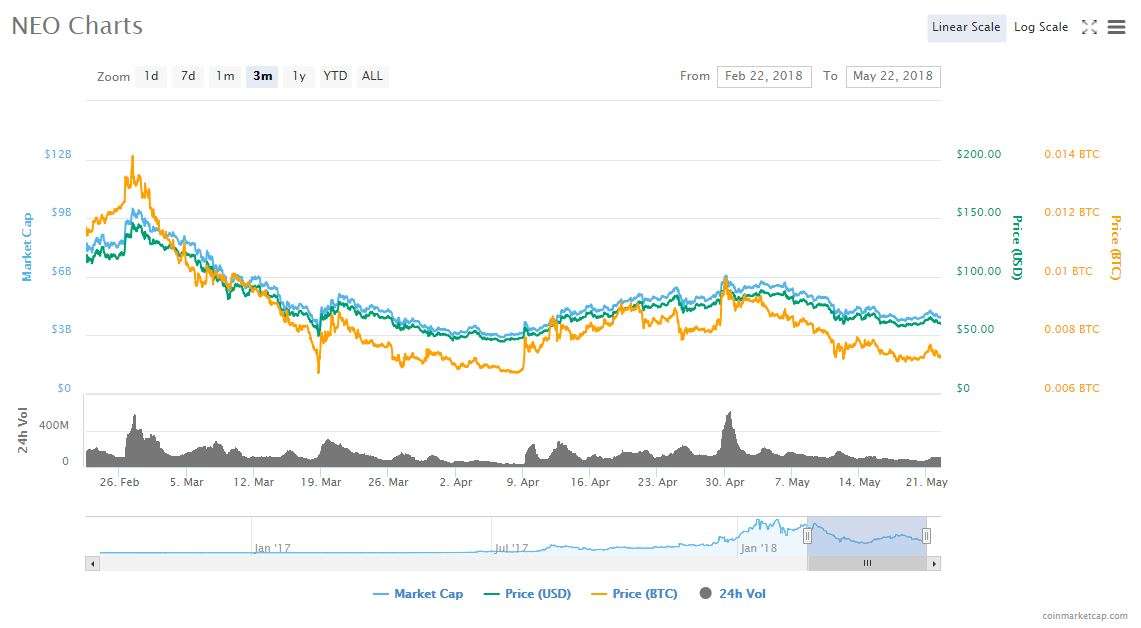 Neo is a blockchain platform as well as a cryptocurrency which enables users to build a scalable network of decentralised apps. The NEO coin generates GAS tokens that can be used for transaction fees that are created by applications on the system. NEO allows some programming languages to be used such as Javascript and C++.

The project was launched in 2014 as AntShares with development provided by Da Hongfei through his company Onchain. It then rebranded to NEO in June 2017.

In March 2018, the parent company Onchain started distributing one ontology (ONT) token for every 5 NEO that was held in a user’s wallet. These could be used to vote on things such as system upgrades, ID verification and other services on the NEO platform.

There is a lot of speculation about the possibility of China ending its ban on ICOs. If this happens, then it is pretty certain that the value of NEO will increase. Furthermore, 50% of the Origin tokens have been released at the moment, and the remainder of the ONT tokens will be distributed in Q2 leading to higher value for each NOE coin. 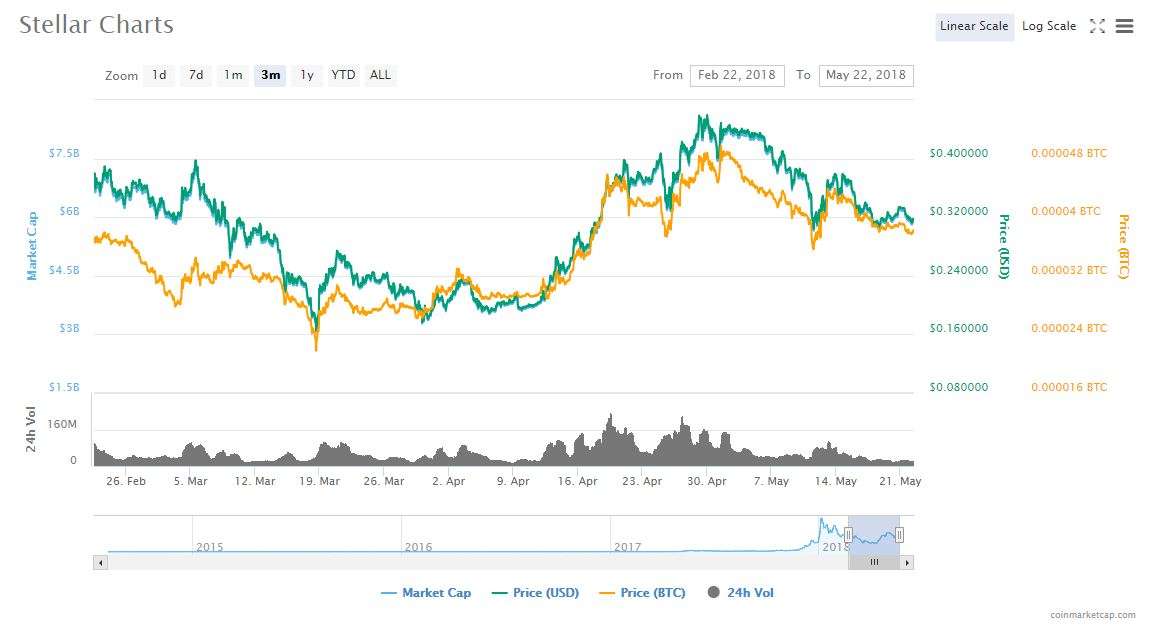 Stellar is slowly becoming one of the sectors most dominant and exciting cryptocurrencies. With high profile partnerships, a great team behind it, and some solid foundations it is one to watch for 2018. One of the key things on the Stella agenda will be the integration of Stella and the Lightning Network.

This will allow more high-volume transactions as well as substantially increased security meaning a much higher level of scalability for XLM. With testing and trials already underway we are expecting further developments on the lightning network sooner rather than later. This will significantly increase the value of its XLM coin during the second half of 2018.

Stella has also caught the attention of one of the world’s largest online payment providers and gateways- Stripe.

After Stripe dropped their support for Bitcoin, they announced that they are considering supporting XLM instead. This caused a price increase in Stella of 20%, and if other announcements are made public, the price could very well jump again.

These are just some of our suggestions for coins to consider investing in during the second half of 2018. Of course, with a market such as a cryptocurrency market, it can be challenging to predict what will happen.

That said, these projects and coins seem to have a good future ahead of them so don’t be shy- do your research, and maybe you will stumble across the next Bitcoin!

Read more on How To Choose Cryptocurrency To Invest.

Bitcoin Cash Price Prediction 2022-2025: What Can This Hard Fork Achieve?