It’s official – Tamagotchi and Pokemon can both move to the old school category.

A new game is storming through the market, and to keep up with the latest fashion, it’s built on nothing else but the Ethereum platform.

CryptoKitties officially launched in November 2017, and within a week it made 35,000 sales and accumulated a shocking amount of $4 million.

So without any further ado, here’s everything you have to know about the hottest game CryptoKitties and how to play the first Ethereum-based game. 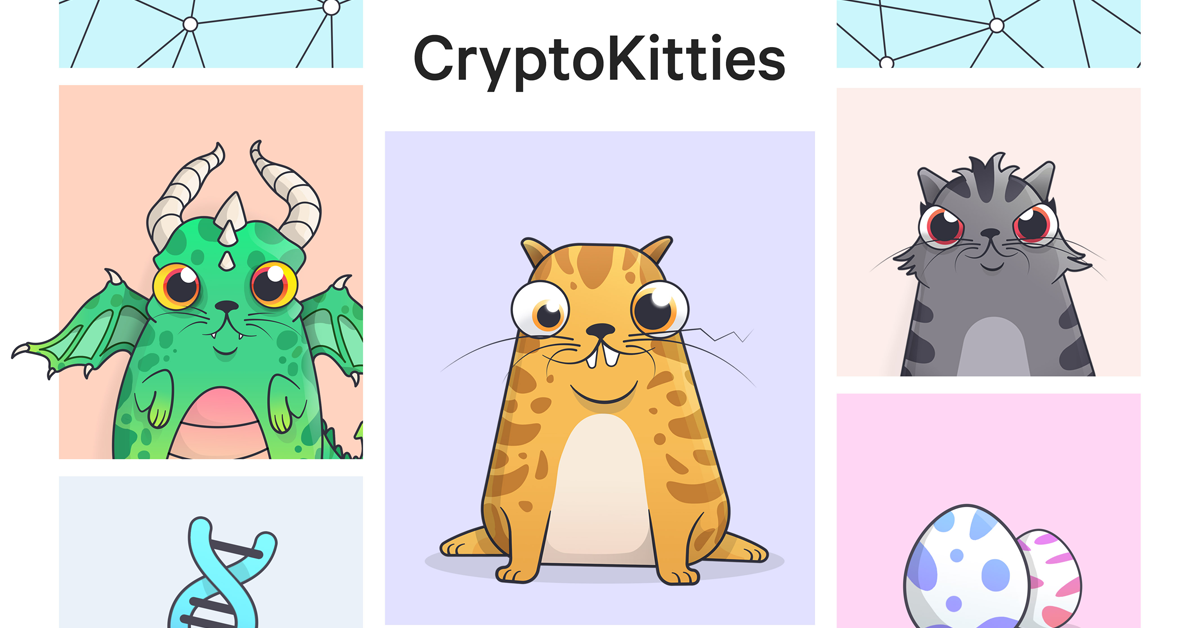 The concept behind CryptoKitties is pretty simple – you start by purchasing a virtual cat in exchange for Ether. The cat is unique, only you own it and you cannot duplicate it.

Crypto-geeks call this concept ‘non-fungibility’, I like to call it a one-of-a-kind cat.

One you own two cats that aren’t related (well, you can interbreed, but we don’t encourage that), you can breed them and bring a new cat to the community.

Unfortunately, the only thing you can do for the time being is breeding, so you cannot feed or clean your pet as you would with Tamagotchi.

Apart from buying, trading and selling them, breeding is one of the most popular ways of ‘releasing’ new cats as you can make original and cool-looking cats that can be worth thousands.

Kittens can come with different visual traits, and naturally, some are more unique and valuable than others.

One of the most expensive cats has been sold for more than a £100,000, and the total sale of kittens accumulates to almost $4 mln – pretty impressive for a week run.

So, what’s the point of the game?

Well… The fun is in the fact that the game doesn’t have an end goal. You breed kittens, sell them, trade and earn Ether in exchange that can be later transferred into a fiat currency.

How To Play CryptoKitty?

Even though the game is created on the Ethereum blockchain, is extremely easy to play and doesn’t involve much effort to start.

The game is available via a MetaMask extension; hence the most convenient way is to play it on the desktop.

Here’s how to do it in a few steps:

To start playing the game, you first have to purchase some Ether and transfer it to a digital wallet MetaMask.

No other wallet supports CryptoKitties, so you have to start with installing MetaMask on your browser (Chrome, Brave or Firefox). It’s one of the easiest wallets, and since it works as a Chrome browser extension, it makes it simpler to interact with most decentralised apps built on Ethereum.

If you don’t own Ether yet – check our guide to the best cryptocurrency exchanges which offer Ether, such as Bitfinex, Coinbase or BitPanda.

One you buy Ether and install the MetaMask wallet, you have to transfer Ether from the exchange to the wallet.

Bear in mind, that the minimum recommended amount, won’t give you much flexibility in the game. You not only need enough to experiment with the kitties but also to cover all of the transaction fees.

Hence, if you’re serious about the game, you would probably have to invest around 1ETH to truly enjoy it.

OK, so you bought some Ether and installed the MetaMask wallet. Time to start playing the game.

Once you create an account, you will see that that the game doesn’t have as many exciting features as you would hope. The only thing you can do is breeding (or siring as it’s described in the game).

Once you start breeding your kittens, you can move into selling, trading or lending them to others, and making a profit that way.

But, for the time being, let’s just stick to breeding.

Start with getting one kitty (or better two as you would be able to breed them) and pay for it with Ethereum via the MetaMask wallet.

The game starts getting interested as you begin to figure out which traits are rare and valuable, and how to get them.

Even though there are thousands of kitties in the game, only some of them would belong to a unique breed or have rare visual characteristics.

Kittens with the most unique features cost a hefty amount of money – some of them going up to millions of dollars already. 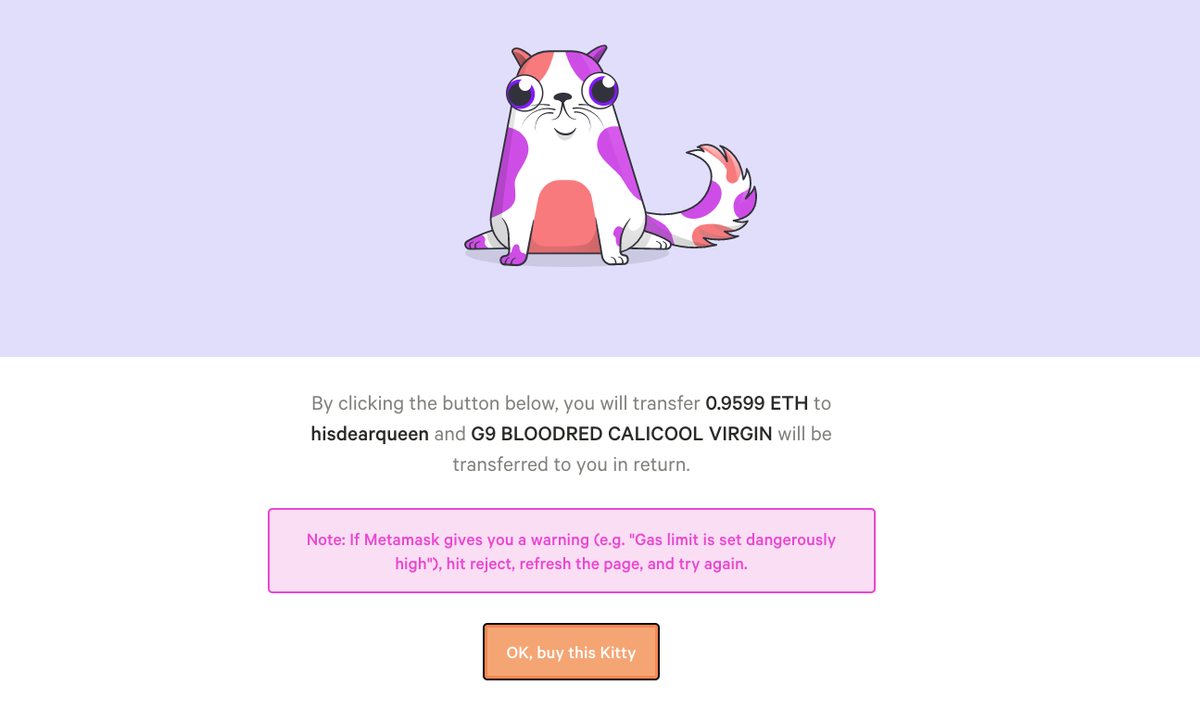 While buying a kitty, there are two essential things you should look at besides the visual traits – the generation number and the cooldown.

The generation number describes how many generations a kitty is removed from the Generation 0 kitty.

The Gen 0 is introduced every 15 minutes, and it’s the beginning and kitties from the Gen 0 are considered the most desirable. Some of them can cost you up to 8 ETH.

The higher the number, the worse qualities the kitty has, and it won’t perform well long-term.

However, in the beginning, anything between Gen 8-15 will do well, as you want to get the feeling of the game first.

One of the tricks, however, is to breed with low Generation kitties only – it will result in a tremendous genetic offspring pool.

So, once you get the gist of the game, start looking into investing in low Generation kitties.

The cooldown tells you how much time a kitty needs before it can breed after it gave the last birth.

As weird as it sounds, the scale can go from ‘fast’ to ‘catatonic’, and naturally, the faster a kitty can breed, the better.

The problem, however, is that every time a kitty breeds, its cooldown drops and it becomes less desirable.

While you can compromise the Generation at the beginning, you should pay more attention to the Cooldown time, as you would want to breed your kitty.

Is It Easy to Find Rare CryptoKitties? 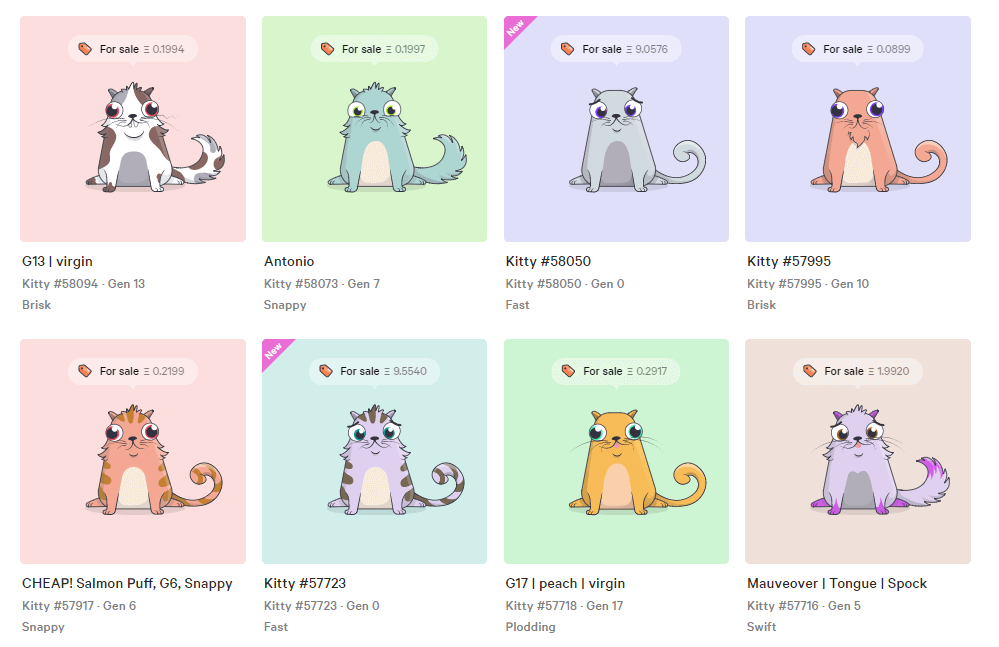 The answer is simple – if it were, everyone would be doing it.

The algorithm of creating rare kitty traits is only known to the developers behind the game, and according to AxiomZen, these people are not allowed to play.

There’s no fixed algorithm for rarity in the game, and it’s the marketplace and players’ demands that dictate all prices.

Luckily, there’s a CryptoKitty index that keeps track of all traits and how common they are. So if someone is selling a kitty with “EXTREMELY RARE” features, you can check it with the table and see if the kitty is worth your money.

Kitty’s genetic material might be a 256-bit number, and specific traits correspond to particular numbers, but the way traits are passed on is relatively similar to how human characteristics are inherited.

Kitties might acquire traits from their parents, but it doesn’t always happen. At the same time, a baby kitty can be born with entirely new characteristics that neither mum or dad have.

You can try guessing and figuring out the algorithm, but the chances are it would either change or would take you too long to come up with an answer.

In the beginning, you should perhaps stick to breeding the kitties as often as you can and hope the new breed will come with unique features.

The Consequences of CryptoKitties

The game has certainly helped with building a bridge between the techies and the everyday person.

Some people are buying Ethereum just to be able to play CryptoKitties, and fascinatingly, the crypto-barrier is breaking.

As soon as we have started getting used to the fact that cryptocurrency can be challenging to learn, CryptoKitties makes it look incredibly simple.

However, CryptoKitties had also more significant impact than just fun.

It increased the number of transactions on the Ethereum, clogging the same the network and slowing down the transaction process. 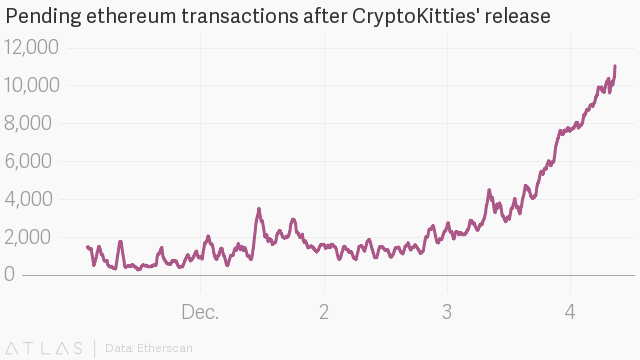 Within a week, CryptoKitties made for 10% of all Ethereum computations, and the in-game birth rate increased from 0.001 ETC to 0.002 ETH.

The game once again highlighted the Ethereum’s scalability issue and raised a serious concern over the future of the ‘World Computer’.

Currently, Ethereum is considered as the only platform for decentralised applications and smart contracts, but that might change soon as the competition is looking into other options.

There are rumours that IOTA is looking into a smart contracts integration, which would mean a potential loss of value for Ethereum.

However, if you’re just into crypto-pets and crypto-fun, don’t concern yourself too much with the network’s issues and instead concentrate on becoming the next CryptoKitties expurrt.

Focus on CryptoKitties and figuring out how to play the first Ethereum-based game, while the network can still handle it.