2017 has signified a remarkable milestone in the realm of blockchain and cryptocurrencies. After the massive bull market of 2017 (and its ensuing crash), the world can no longer ignore the emergence of this technological giant ushering in a new age of how to do business.

The Crypto-ecosystem abounds with a myriad of new ideas, seeking to “blockchainify” anything under the sun; from the more mundane concepts such as using blockchain for real estate transfers up to the intricate complexities that come with the so-called “Internet of Things”, Decentralised- Exchanges and Peer-to-Peer Smart Contracts.

Needless to say, the vast majority of ICOs and related start-ups will fail.

Not for want of the integrity of the blockchain technology itself, but through a multitude of factors (outside those projects which are deliberate scams), such as funding, competition and in most cases an insufficient appreciation of the true values of Blockchain leading to a misapplication of the technology itself.

As Blockchain acts as a building block for the trust for the commensurate conveyance of value, the first victims of its disruptive effects will essentially be those whose primary business is Money.

Long touted by the many anarcho-capitalists and proponents of the Cypherpunk movement, Bitcoin is spearheading the attack on the “Banks”, by providing its decentralised alternative. However, the banking system is not the only aspect of financial services that stands to be disrupted as more and more people defect from the traditional institutionalised realm of finance and move into the crypto-space to raise competing for decentralised applications for the services of investment management, insurance and lending platforms; the so-called “Killer-Apps”.

That being said, none should be alarmed; save for those who discredit the possibility of change.

It is, in fact, those long-standing institutions that choose to work with the technology rather than against it that will emerge as victors in the coming years, and those who resist or fail to give it any importance that stand to lose – just ask any of the ex-board members of Kodak or Nokia (although Kodak is again attempting a return a la Shaun of the Dead through its own ICO).

Blockchain Benefits For the Retirement Industry 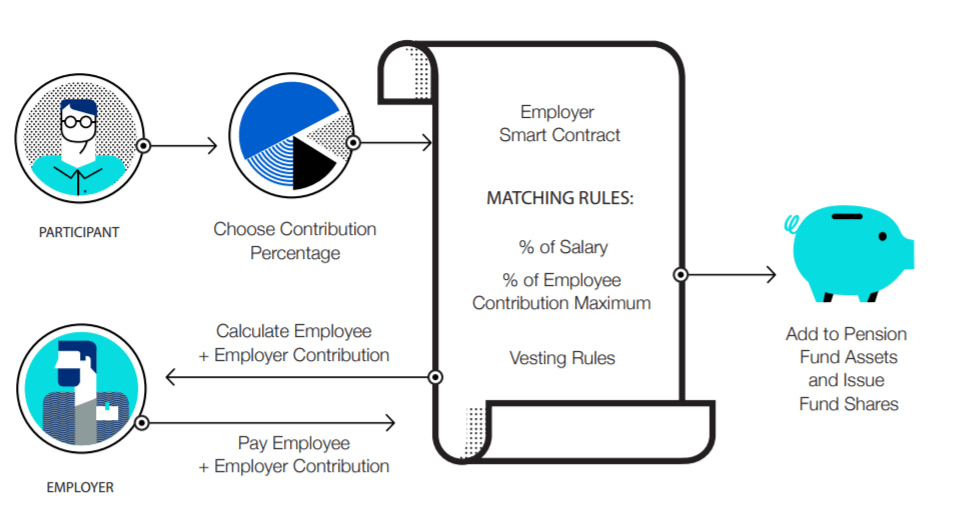 Today, the retirement service industry is one more industry facing this fork in the road. The many use cases of blockchain seem to come in tandem with the many administrative requirements and headaches that Retirement Scheme Administrators presently face today as a consequence of dated technology.

For those less familiar with the true value proposition of Blockchain, in simple terms, what this technology offers the world is its key attributes as being Open, Decentralised, Borderless, Immutable, Neutral and Transparent. What this essentially means to the many service providers is that traditional business paradigms have shifted from a model that has a high concentration of intermediaries and gatekeepers to one which is an open platform which eliminates many of the costs and risks associated with traditional models.

In a world where returns on traditional investments are particularly low, and fees keep on increasing, the winner in such a market will be the player who makes use of the appropriate tools to dis-intermediate his way to the prospective client.

Smart Contracts and Blockchain offer the possibility to integrate a piecemeal solution into a wholesome product which lowers the costs and barrier to entry of potential clients, not the mention risks.

Where before a person seeking to enter into a client-business relationship with an Administrator or New Administrator would have to go through a multitude of advisors, introducers, an investment manager and ultimately the Administrator itself through a trust-based system of traditional contractual agreements.

Smart Contract upon a common Blockchain platform can easily maintain all this information and contractual ties between all parties.

This would not only save time and reduce costs in administrative and legal expenses when conducting the traditional exercise but would also act as an immutable and transparent ledger to truly reflect the legal ties of each of the parties and provide a reliable overview of the effective operation of the ecosystem to the regulator.

Some other use cases for Blockchain in the Pensions Administration industry is the reduction in costs of operation, primarily due to the capacity to operate a system through self-executing Smart Contracts which could automatically do what would otherwise traditionally require a team of administrative staff.

Furthermore, the costs associated with the change of administrator or other service providers would find no justifiable cause in a system as digitised as blockchain for a simple set of clicks and inputs could translate in the shifting of an entire pension pot and its ensuing investment portfolio from one plan to the next.

Without eroding at the importance of operations that many such service providers in this space face on a daily basis, the nature of the contractual network, the repetitiveness of certain functions and the ever increasing digitisation of the work make the pension service industry yet another candidate ready to embark on the blockchain train.

For instance, matters concerning the review of multiple application forms and documents can easily become a thing of the past as participant may join through a digital smart contract using a commensurate digital signature to consent to the terms. The record would remain an indelible mark on the blockchain that would only be subject to the very predetermined rules of the chain and the smart contract itself. This would invariably standardise processes and eliminate substantial red tape and more importantly serve as a repository for evidence that is transparent to all parties.

Another and yet possibly the more important factor is that through the reduction in costs and appeal as a novel digital concept, the pensions industry can finally begin to work its way in the younger, less affluent and even less “savings” oriented, generation.

The blockchain any its other iterations could potentially eliminate those factors which make the younger generation less willing to put aside money towards a traditional pension plan often due to barriers such as costs, bureaucracy, lack of simplicity and the absence of a clear value proposition for such people.

In the world of the internet, mobiles and apps, the ability of people to get involved directly with ease, and with less human interaction as possible, has become a selling point. And while the world will always retain an old guard of providers and clients who will stick to their ways and the confidence it so provided over the many years, the new generations will embrace the new models as contemporaries until such will become the norm.

It is in light of such possibilities that abound one ought to think what could Blockchain do for one’s own business model. While the integration of this fledgeling technology into our daily lives has yet to manifest its true potential one can already see the efforts of thousands of entrepreneurs, from the startup level up to some major institutions, dip their toes into these uncharted waters.

The ultimate question that will be relevant in the next decade will be; who took the dive.