In the biggest organisational shake-up of the last 15 years, Facebook created the Blockchain Division.

The new department will be led by the former Facebook Messenger App, David Marcus who together with his team, will enter an exploratory stage to assess the potential of blockchain technology for the Social Media giant.

After facing a worldwide Cambridge Analytica scandal, Facebook’s CEO – Mark Zuckerberg – has been scrutinised over the platform’s data protection and faced a critical question over the future of Facebook.

The creation of the new department came with multiple changes within Facebook’s top-level organisational structure. However, nobody has been hired externally or let go.

While the move is unexpected, the choice of David Marcus a the project leader is very strategic – as the former CEO of PayPal and the current board member of Coinbase, Marcus is familiar with blockchain technology and its intricacies:

In January 2018, Mark Zuckerberg has already mentioned Facebook was investing cryptocurrencies as a form of improving the business. However, after the famous crypto and ICO advert ban, the subject has never been mentioned again.

Following the recent controversies, media and individuals worldwide have started questioning Facebook’s impact on the world and its social responsibility. While Zuckerberg hearing before the US House of Representatives might not have been a success in its entirety, one of his New Year’s resolutions was to fix Facebook – restructuring the team seems like a part of that fix.

No clear prospects have been revealed yet, but David Marcus seems optimistic about the new area Facebook will be exploring: 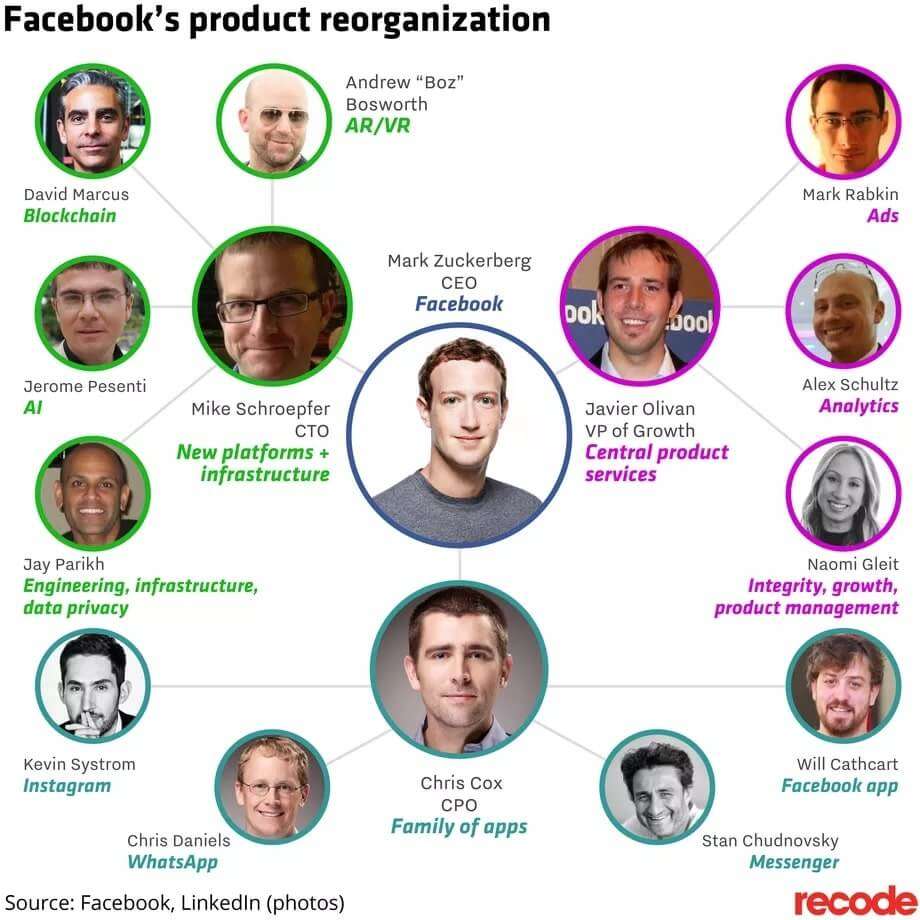 The Cambridge Analytica scandal revealed that 87 million Facebook users had their data mishandled, which potentially subjected them to biased and manipulative advertisements.

While this action is understandable, it also highlights an underlying problem of all content sharing platform – the data and intellectual property are no longer in user’s hands as soon as it’s handed over to Social Media Moguls.

Mark Zuckerberg has a long record of investing in ventures that pose a particular threat to Facebook – he spent $1 billion on Instagram because it was a leading platform for young people to share photos; $19 billion on WhatsApp to ensure the leading messaging app belongs to Facebook. Finally, he cashed out $2 billion on Oculus Rift to strengthen Facebook’s position in consumer devices.

The next one on the list seems to be blockchain.

As the blockchain grows in popularity, platforms such as SteemIt and DTube are slowly gaining more traction, and most importantly, trust from the community.

Undoubtedly, decentralised social platforms will keep on popping up in the next few months, each one of them offering something unique.

Facebook, however, has one massive advantage – over 2 billion users around the world, all of whom are controlled by the centralised Facebook.

Blockchain promises to eliminate the middleman and the central power; it poses the vision of the world without Facebook, Google, Amazon and many others.

According to Spencer Bogart, a partner at Blockchain Capital:

“I certainly don’t think blockchain is an existential threat to Facebook today. Could it be? Yes, longer term. That’s why they want to be smart and stay engaged.”

So far, no other Social Media platform can compete with Facebook. What’s more – blockchain still hasn’t reached the level of adoption, and the casual man on the street still doesn’t understand the lack of data protection and the opportunities brought by the DLT.

For the time being, there seem to be no blockchain-related acquisition plans, David Marcus has only been given the tools to see how blockchain can be used internally in addressing Facebook’s vulnerabilities.

If Facebook successfully implements blockchain, it would be the first company worldwide proving that DLT can serve billions of customers. Blockchain networks struggle with handling a large number of transactions, and the technology is still in its infancy.

It wouldn’t be the first time, though,  for Zuckerberg to prove that impossible is nothing. Facebook creating the Blockchain Division is just the beginning.