If you’ve invested in cryptocurrencies and want an easy way to manage your portfolio from your mobile phone or other devices, you should take a glance at the Delta, cryptocurrency tracker.

The Delta tracker is arguably a better alternative to Blockfolio, and the developers have added easy-to-use features, including an automatic transfer of trades in their latest update: the Delta API Integration For Exchanges.

This article will walk you through:

Who And What Is Delta?

Delta is a cryptocurrency management app that enables investors to manage a digital token portfolio all from one place.

With easy to use tools, at-a-glance status reports, and critical market alerts, Delta is an essential tool for cryptocurrency investors

The developers of Delta created the tracker app because they did not feel Blockfolio offered customers enough.

Subsequently, they made the improvements, most notably by providing access to all ICOs and allowing users to add tokens from new ICOs.

Last month, Nicholas van Hoorde, one of the co-founders and architect of the Delta Team posted an update on his Medium account announcing the launch of a “major 1.6 release” which is entirely focused around API Imports.

If you don’t understand development tech-talk, an API stands for Application Programming Interface which allows two computers to communicate and exchange information.

So in this case, one computer is your iOS or Android smartphone on which you downloaded the Delta app. The other computer is the cryptocurrency exchange you are buying or selling digital tokens with.

The Delta Team say they prefer to call the API – Exchange Account Connections (EAC). Like that makes much more sense.

The EAC gives users an alternative option to import virtual coins or make transactions with Bitcoin and other digital tokens that can be used to swap for other virtual coins or buy merchandise.

According to the Delta Team, many app users confirmed they wanted “to go PRO” which would give them access to automatically action trades.

It would seem the response from existing users was so overwhelming, Delta’s developers decided to make the API available to everyone.

The ‘Exchange Accounts Connection’ feature allows investors to import transactions you have made, and will make in the future, automatically without having to go through the hassle of manual input.

You also have the option not to import previous transactions. If you select that option, only future trades will be automatically imported.

There is also an option to remove previous transactions that you want to delete when you replace them with the automatically imported data.

This helps keep your portfolio tidy and not cluttered with duplicate entries.

At the moment, the feature only handles withdrawals and deposits made with fiat currencies. The Delta API is not equipped to process the transfer, withdrawal or deposit cryptocurrencies.

Not yet at least. But the Delta team has expressed their intention to develop this feature at some point in the future.

“This will change in the future when we support these types of transactions.”

Which Exchanges Are Included? 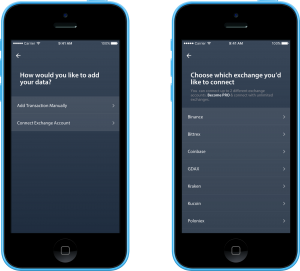 The initial version of the API only supports Bittrex, GDAX and Binance. This is purely formality while AEC is in beta testing. The Delta team say more exchanges will be added shortly.

Setting Up The Exchange Connection API

Adding your account details to the Delta API is straightforward enough. All you have to do is log in to the exchange you want to trade with and create an API key by filling out the information on the form.

Well not quite. The data you need for the set-up the process, or to learn what will happen from a specific selection, could prove to be a little more tricky.

However, Delta has thought of that too and added a question mark (❓) in the top right corner of your screen.

Click on the ❓icon and instructions will appear explaining everything you need to know.

The handy guide is a step-by-step instruction panel. Just follow the on-screen prompts, and you should be able to add your account details without any bother.

The EAC can only be attached to one single portfolio. If you want to add other exchanges, you will have to set up accounts for each currency.

Once your connections are added, you can manage your portfolio via Settings.

If you decide to disconnect from the EAC, your account portfolio will be restored with the original data you had before setting up the API. This means that any existing transactions you selected for removal will reappear.

To install and use the EAC, you only need to add the read-only keys. The API can communicate with exchanges without requiring your trade keys.

Keys that have a higher access level than read-only will be refused. This protects the security of users that accidentally input the wrong key.

One important thing to note is that your key code is stored on your device only. It is never revealed to the exchange’s server. The EAC has an API key which is used to communicate data.

This provides an extra layer of security.

It is advisable to make a note of the API key. If you lose or forget the code, it cannot be recovered.

Other than not being able to apply trades with cryptocurrencies (for now at least), the only other limitation of the Delta API is that some exchanges do not allow the app to recover data from past transactions.

Some exchanges limit data recovery to the last 30 days and some to the previous three months.

Likewise, if you choose the option to ‘Remove Existing Transactions’ only trades that have been made in the permitted time span will be removed.

For cryptocurrency investors that want an easy-to-use and useful portfolio management tool, Delta presents a good option, and the new Delta API Integration for Exchanges this is one smart app that just got smarter.

For a better overview, read our Delta vs Blockfolio Review or visit Delta Website.