People can donate Bitcoin, Ethereum and Ripple to a particular address. Bitso will liquidate any donated funds every Friday at noon for the next four weeks, continuing their fundraising effort that has started on September 7. 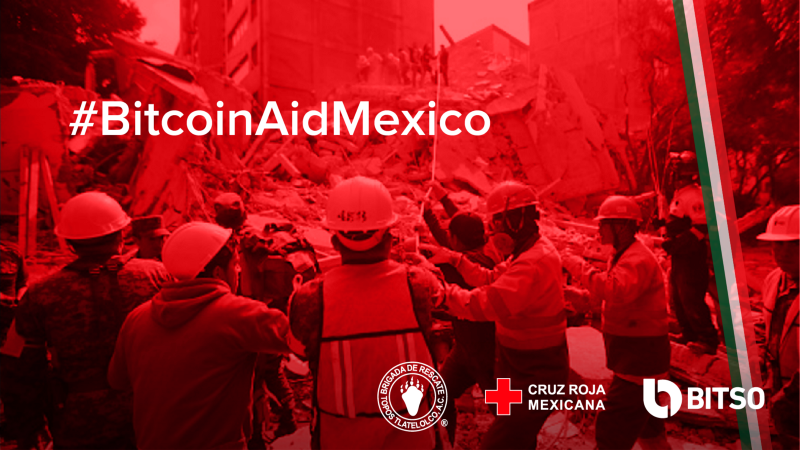 Mexico has been tragically affected by two earthquakes in the past month alone, with a desperate need for financial support. Bitso has already helped Mexico with the previous earthquake, successfully raising over MXN $50,000.

All funds will be evenly spread between Mexico-based Red Cross, and local earthquake rescue crew Brigada de Rescate Topos Tlatelolco A.C. Contributions can be made in BTC, XRP, ETC without a minimum amount required.

Every transaction can also be turned into a verified receipt, signed by the Mexico’s Central Bank.

“Mexican Pesos will be transferred on behalf of third parties according to Mexican law LISR artículo 35, and the following TIN XAXX010101000 will be used to generate the corresponding payment as ‘General Public Invoice.“

Bitso is not the only organisation that opted for cryptocurrency donations. The billionaire entrepreneur and Antigua and Barbuda resident, Calvin Ayre, has offered donations in Bitcoin and Bitcoin Cash to Barbuda residents who were affected by the Hurricane Irma. Another effort came from the Crypto Show broadcast which raised over$50K for hurricane victims in Texas.

Cryptocurrency donations are much more transparent than the traditional way of fundraising. All transactions can be tracked, so there is a certainty that the donations are used for the right cause and there is no risk of theft or fraud.

The new trend of cryptocurrency fundraising and collecting donations is a milestone for digital currencies that has always been associated with the Dark Web. It shows that cryptocurrency can provide transparency and can be used for various purposes.

How To Donate Cryptocurrency for Mexico Earthquake Victims

You don’t have to have an account with Bitso to donate. You do have, however, have a cryptocurrency wallet and funds in BTC, ETH or XRP.

If you don’t have any cryptocurrency yet, purchase it on BitPanda or Bitfinex. Ripple can be bought on Bitso or GateHub. Afterwards, you just have to transfer the designated amount to following accounts:

To help raise awareness, use the hashtag #BitcoinAidMexico.

What do you think about Bitso launching cryptocurrency donation for Mexico earthquake victims? Let us know in the comments below!