Even after the doomed chain split and the new altcoin – Bitcoin Cash – Bitcoin is now worth over $3,000 and the price has soared up by almost 16% since Friday alone.

Bitcoin chain split was expected to cause a considerable network disruption and investors were prepared to see a major drop in price. Not to mention the amount of Bitcoin holders who sold all their funds in a fear of the unknown.

At the heart of Bitcoin’s dispute is an issue that has been pressing for the last few years: as Bitcoin’s popularity had kept on rising, the speed of transaction has slowed down. So to solve the capacity issue, a group of developers signalled their support for a SegWit2x implementation which would increase the network size to 2MB in November this year.

At the same time, a group of miners wanted a bigger and more drastic increase to 8MB which resulted in a creating new altcoin – Bitcoin Cash. The new coin had features priced at almost $500 and it was anticipated to be the biggest Bitcoin competitor. 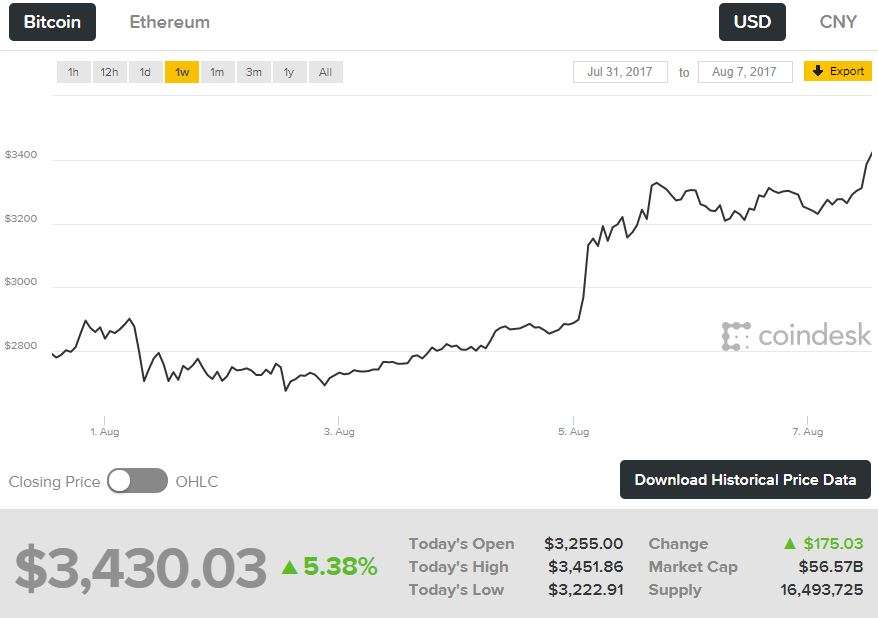 One of the biggest surprises in the eve of Bitcoin hard fork was the growing price. Despite the uncertainty of what was going to happen next, investors still believed in Bitcoin value and the price hasn’t dropped.

So the recent and the sudden acceleration in price only raised a question: how much more Bitcoin can go up to?

The success can not only be seen in the continuously rising price over the last year but also the post-crisis recovery. The hard fork has turned out to be a blessing for Bitcoin, indicating a strong belief in this particular cryptocurrency.

And it’s not just traders and investors who have trust in Bitcoin – the public’s demand is rising, with more people realising the convenience of using Bitcoin on an everyday basis and the potential future investment.

What’s more – with several countries around the world looking into Bitcoin regulation, everyone has started to realise that Bitcoin is no longer a Dark Web tool and invention of the future. It’s a financial revolution that is going to happen only once in our lifetime.

Only a month ago, Goldman Sachs predicted that Bitcoin could reach a price of $2,900. Four weeks later, we are already looking at a higher amount.

According to Kumar Guarav from Auxexis Group, Bitcoin could go up to $10,000 in the next three years. He also adds that even though only a small fraction of the population is interested in Bitcoin at the moment, in the future, it can bring a solution and freedom to people trapped in difficult economic systems:

“There is increasing legal recognition, increasing media attention, a growing usability and acceptance, while the original, political reasons leading to Bitcoin’s popularity are strong as ever. Most recently the EU announced the possibility for it to freeze bank accounts to prevent banks from failing, reminding of what caused the first ever Bitcoin rally, the Cyprus savings raid.”

Bitcoin price went up to record $3,000 but it doesn’t mean that he scaling debate is over. The agreed increase in block size with the SegWit2x agreement can still be rejected by many developers.

For the time being, we have to wait until November and the promise SegWith2x is going to bring to Bitcoin’s network.

But if there’s one thing we shouldn’t be afraid at the moment is investing in Bitcoin – it’s in a prime time we’ve all been watching out for. Worry about Bitcoin Cash later, if there will be anything to worry about.