The core idea of cryptocurrency is to be decentralised – free from a third party involvement and without a government control.

And this is where Change Bank – the first cryptocurrency bank – falls into place. It aims to create a bridge between the virtual currency and real life. It’s a decentralised crypto-bank that uses a Change Coin as it’s native token.

Keep on reading to find out what are the properties and features of Change Bank and how is it going to disrupt the fiat banking industry.

What Is Change Bank

Change Bank was founded in 2016 in Singapore and it has come a long way ever since. Currently, it is preparing for its first ICO starting on September 16.

The goal of the bank is to provide a revolutionary service around the world, without the borders and bureaucracy of traditional financial services. It is very clear from the official White Paper that the bank aims at modern, young and cosmopolitan people who have a different vision of the future and want to break the loop.

The bank will be fully focused on cryptocurrency and it will have a universal wallet for all major cryptocurrencies such as BTC, ETH, LTC etc.

The bank is fully digital which means they also have fewer overheads. Hence, having an account with Change Bank, making transactions or transferring funds, are free of charge.

The Change Coin is a native cryptocurrency token, designed specifically for the Change Bank. The ecosystem of the bank will support all major cryptocurrencies and the Change token will be used in combination with the Change Card.

At the beginning, Change Coin will be used as an ICO for the investors but there are plans for it to be traded on major exchanges in the future, just like Bitcoin or Ethereum.

Change Coin will also be used as a part of a cash back program – every time a user makes a payment using Change Card, they will receive a 0.05% rebate in the form of Change Coin. And if a user spends Change Coin as a payment method, the rebate will double. The cash back doesn’t give the customer’s fiat currency back, but the Change Coin.

The new cryptocurrency bank has a lot of innovative features, especially comparing to the traditional bank:

The bank has its own mobile app that has an inbuilt electronic KYC, enabling customers to register with the bank in an extremely short amount of time. The app automatically validates the user’s details and transactions. Third parties can also be provided with a tokenized KYC information sharing, which helps with the onboarding process. Thanks to the innovative KYC program, Change Bank was able to partner up with Estonia and create a new form of digital ID based on blockchain technology.

Change Bank will issue its own, specifically designed, bank card. It will work just like a traditional other bank card, allowing you to make payments with cryptocurrency. The card will work only with the licensed MasterCard operators.

One of the biggest advantages of the Change Bank is its own wallet that will allow for a multiple cryptocurrency storages. It will work similarly to an online bank account, allowing easy transfers of funds between peers or paying your bills with cryptocurrency.

The bank uses an enhancement security system based on blockchain technology which allows you to block your card from the application anytime you want.

Since Change enables cryptocurrency payments in everyday life, it also aims to introduce a place where users can invest in stocks, pay for traveling, money lending between users in a secure environment of blockchain technology. Change is looking beyond decentralised currency, it also wants to bring decentralised services.

How Can You Use Change Bank 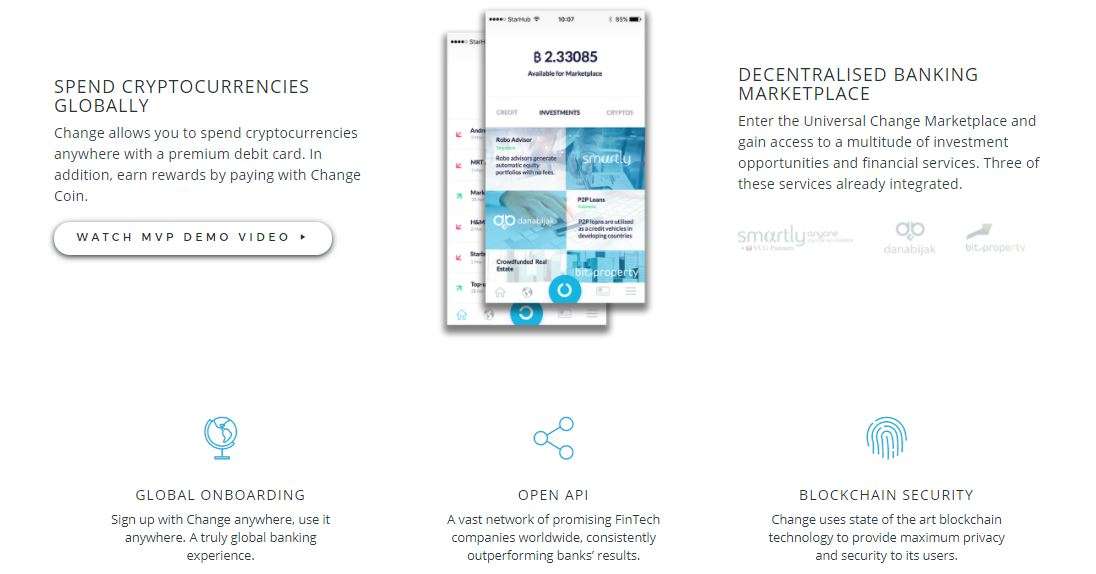 The idea of creating a Marketplace and decentralised third party services truly looks beyond the scope of being a bank. Thanks to Change, cryptocurrency can be used in three main areas: spending, investing and… travelling.

Change Card can be used anywhere globally like a traditional card. You can find it with any of the supported cryptocurrencies and use it as a method of payment wherever traditional payment cards are accepted.

Currently, cryptocurrency is an investment on its own. Usually kept on the wallet as an asset, it rarely sees the future investment potential. With Change though, your cryptocurrency could be reinvested into anything, e.g. property or stock exchange.

The Change API will also become open to credit and insurance industries. Using the earlier mentioned Marketplace, anyone will be able to purchase a car or health insurance through a decentralised application. The Change card will also cover a travel insurance.

Change Bank has already partnered up with Estonia to create an e-residency card. The new form of identity allows anyone to create a digital form of identification, with all personal information. Without physically being anywhere near around the EU, users can create a bank account, file their taxes, sign documents or even start a company.

Change Bank is without a doubt an innovative and revolutionary way of connecting cryptocurrency to the real world. For the first time, cryptocurrency won’t be restricted to just being an asset, it can become a valuable method of payment and an investment tool.

The ICO crowdsale starts on September 16 and it will last for a month. There is a cap of 200,000 ETH tokens for the entire ICO and 40% of the total tokens’ supply will be sold through the ICO. The bonuses are available for the first 24h, and first two weeks. The ICO is open to anyone except Singapore, Estonia and the US.

The minimum investment is 0.5 ETH and early birds will enjoy special perks such as discounts and exclusive Black Card.

Bear in mind that Change Bank, like any other ICO or cryptocurrency, doesn’t promise a success or profits. You have to assess the risk yourself before making an investment.

What do you think of the Change Bank as the first cryptocurrency bank? Do you believe in the concept and are you planning to invest? Share your thoughts in the comments below and don’t forget to share the article on your Social Media!