The cryptocurrency community certainly has plenty to get excited about.

NEO coin, and the blockchain technology that powers it, is a prime example of why people are raving about digital currencies.

NEO Coin is the leading cryptocurrency to come out of China and is tagged to rival Ethereum – which at the time of writing is the cryptocurrency showing the most promise.

Dubbed the Chinese Ethereum, NEO is a non-profit, open-source project and has plans to build a ‘smart economy’ across a distributed network.

It is the first project that meets the requirements of private companies, end-users and government regulators.

In essence, NEO aims to achieve what cryptocurrencies were designed for in the first place; establish a decentralised system of trade and finance that promotes transparency, trust, equanimity and a stable economy.

In this article, we will cover:

What Does NEO Promise?

Like many other cryptocurrencies, NEO utilises blockchain technology to create automated digital assets that can be managed, tracked and protected.

Although only launched into the public domain in 2015, the project generated an immense amount of interest very quickly.

The reason for the hum-drum is because NEO has the potential to enable users to register, trade and circulate assets in a digital environment, but ensure contracts are validated and protected by laws of the land.

Essentially, digital assets will be treated in the same way as physical assets.

If you know anything about Ethereum and smart contracts, NEO works in the same way.

The difference between NEO coin and Ethereum is that NEO also resolves issues with scalability and can also provide processing speeds the blockchain requires to function in real-life terms.

Smart contracts enable users to exchange goods online and establish a trust between parties that the contractual obligations will be fulfilled. When a smart contract is created on a blockchain, a digital signature is sealed that identifies both parties.

However, the smart contracts developed by NEO are revolutionary.

Unlike other blockchains, there is no need to learn how to use a new software program.

This means developers will be able to create smart contracts on the NEO platform far more easily than they can on other platforms.

Subsequently, NEO will be more popular among developers and given it is open-source any business can on-board whenever they like.

In other words, millions of users can access the platform at the same time without crashing it.

NEO also promotes the development of decentralised applications by enabling developers to use established, or emerging, tools and techniques.

This makes the platform robust for any business that wants to set up a digital trade route on the network. 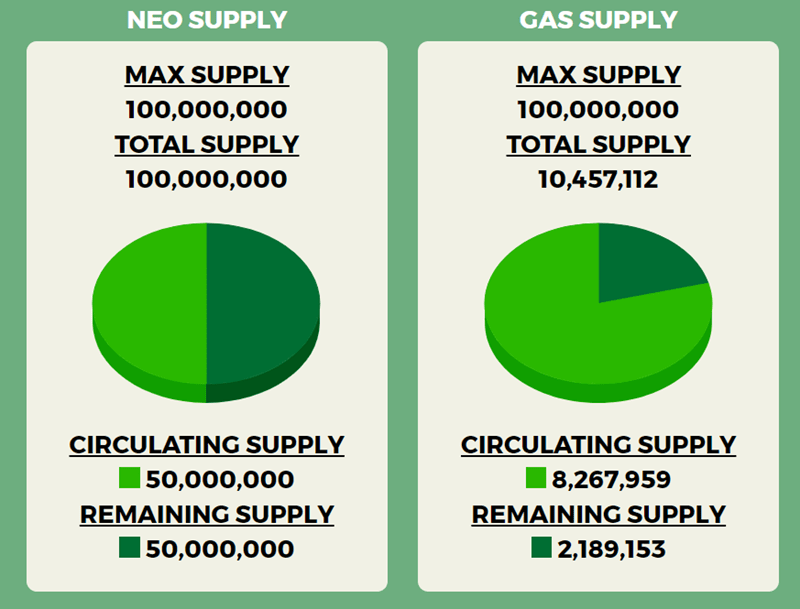 Another feature that sets NEO coin apart from its competitors is the technology uses two tokens that serves two purposes; the NEO coin is an investment tool that represents shares in the network, and GAS tokens which enable users to run and deploy smart contracts.

Owners of NEO tokens have certain privileges such as the right to vote on crucial decisions about the NEO ecosystem and receive annual dividends.

In this respect, NEO coins give holders the same rights as a significant stakeholder in a company. NEO coins are capped at 100 million tokens and are non-divisible.

GAS tokens are the fuel that makes the network function – hence the name, gas. When two people agree to trade assets online, the buyer will pay for NEO gas.

Unlike NEO coins, GAS tokens are divisible and will be used to allocate resources and run operations typically involved in digital transactions.

Their function will be used as a payment to create smart contracts, seal blocks and pay bookkeepers. The more resources you use, the more gas you need to pay.

The Future of NEO Coin

Considering NEO is likened to Ethereum, it’s fair to say the project has enormous potential.

Some commentators even claim the Asian technology will be even more successful than its European rival.

In truth, there is not much difference between Ethereum and NEO.

However, one of the advantages NEO has is the proof of stake consensus is probably the most advanced right now.

Whereas Ethereum uses proof-of-work, a slower process which awards miners to sealing a block, NEO’s system rewards stakeholders that invested in the NEO coin and perform administrative duties in the network to ensure the system runs smoothly.

With Ethereum proposing to produce new tokens that encourage people to dedicate computers to power, the network NEO has a direct rival.

But NEO coin still has an edge – for now at least.

The blockchain runs off a quantum computer which makes it faster and more powerful than any other blockchain project. Again, this is something firms will eventually catch up with, but for the imminent future, NEO is already one step ahead.

As previously mentioned, developers can create applications much more easily on the NEO platform than other technologies as it uses software programmes they are already familiar with.

The adoption of NEO is therefore likely to be the preferred choice of many enterprises because there are fewer barriers that will disrupt and delay projects.

When you consider the attributes of NEO Coin it is easy to see why the digital token ranks among the top ten cryptocurrencies.

NEO still has plenty to prove, but the company has already shown they can achieve what they promise.

NEO coin is not only turning the heads of investors and the cryptocurrency community, but the team behind the technology has also woken other blockchain projects up to the fact they have to improve their systems if they want to stay in the race.

Where To Buy NEO?

Currently, the best option of purchasing NEO is through Binance. You can also trade it on eToro.

#1 Create an account by filling the form on the Binance registration page. You only need to enter a valid email address and a secure password.

#2 A confirmation email would be sent to you to confirm that you registered on the platform. Login to your mail and activate your account. This verifies your registration and gets your process of acquiring EOS tokens started.

#3 To be able to exchange cryptocurrency for EOS, you first have to own some. If you don’t, you have first to purchase Ethereum and you can o it via Coinbase.

#4 Click on FUNDS and then the DEPOSITS WITHDRAWAL at the top of the page.

#5 Click on the DEPOSIT button in front of Bitcoin and wait for the Ethereum wallet address to be generated. Send your Ether tokens to the address that has been created.

#6 Click on the EXCHANGE link beside the Binance Logo, then select the Basic link option that appears. In the top right corner, you can see all the exchange pairs, locate the EOS/ETH pair.

#7 At the BUY section, you will see three fields:

#10 The coins should take a few minutes to be visible on your account. Afterwards, don’t forget to transfer the funds to your Ledger Nano S wallet.

What do you think of the NEO Coin? Do you think it has a chance to overtake Ethereum? Let us know in the comments below!

DASH Coin: The Digital Cash of The Cryptocurrency World

EOS Coin: Everything You Have To Know

Tron Coin (TRX): Everything You Have To Know About The Coin That Took The Market By Storm