Monero (XMR) emerged as one of the most popular cryptocurrencies last year. With a focus on security, privacy and genuine decentralisation, it’s not difficult to see why Monero coin is becoming a crypto favourite.

Given its rise to prominence, however, there are surprisingly few storage options for investors. At the time of writing, there are only a handful of wallets that support Monero coins – and some of those are scams.

However, that news has been quiet for a while. There is a question mark over whether it is possible for third-party blockchain to integrate wallets because of complications caused by the Monero technology.

Last year, Jaxx had hoped to add Monero to its desktop wallet but hit operational difficulties due to Monero’s privacy-focused algorithms.

Storing and transferring Monero requires two cryptographic keys: the spend key and the view key. Both keys contain a 64 character encryption that protects user accounts.The view key only allows stakeholders to check the account balance. You cannot make transactions unless you activate the spend key.

To authorise the transfer of funds, account holders also have a public address which communicates with other nodes in the blockchain, so they know where to send money to you, or so the blockchain knows where transactions originated from while keeping your identity protected.

Investors of Monero are also given a mnemonic seed, a string of random words which enables users to restore an account in the event of forgetting your password or if the device your account is downloaded on is lost, stolen or defunct.

Always write down the code of the mnemonic seed or could lose your entire stash of Monero coins.

There are various types of wallets available for storing cryptocurrencies.

The most secure are hardware wallets which are removable devices akin to a USB or portable hard drive.

Hardware wallets essentially store the data to your crypto assets offline where they cannot be stolen by cybercriminals.

At the moment, the only hardware wallet to store Monero coins is Taushet USB Monero Cold Wallet Generator, but there are some pretty good desktop wallets to take a look at as well.

Desktop wallets are stored on your computer and provide reasonable security providing you take the usual measures to protect your PC or laptop from malicious malware and Trojan attacks.

There are also web wallets, but we don’t recommend cloud wallets or mobile wallets at the moment as they are more vulnerable to cyber-attacks.

It is advisable to keep a paper wallet as well, if only as a backup option, so you don’t lose your private code or mnemonic seed.

Storing cryptocurrencies in a cold wallet is the most effective option form a security viewpoint.

Given the likelihood Monero will scale in 2018, even a small investment in the coin may accrue investors several thousand pounds, so keeping your coins as safe as possible should be a priority.

Hardware wallets are also known as “cold” storage because they are difficult to steal. Thus cybercriminals are cold on the idea of trying to target coins in hardware wallets.

The only opportunity they would have is while you’re using your account to make a transaction, and there is no way for them to know that unless they can see your computer screen.

In the absence of hardware wallets in the cryptocurrency market, high-security wallets have to be generated.

Developers are working on a dedicated hardware wallet, one of which is the Taushet USB Monero Cold Wallet Generator. It has been receiving excellent reviews in several forums.

The only drawback is that you need some digital tools and a bit of tech-savvy to create cold storage for Monero. If everything goes well, it should only take ten minutes to set up. 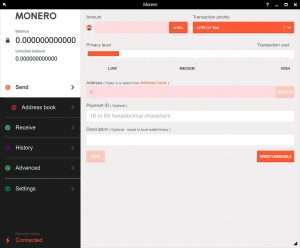 Due to the lack of third-party wallets that integrate Monero, investors only have a couple of options in which to store crypto assets outside of cryptocurrency exchanges.

The safest option is arguably the standard Monero GUI which can be installed onto Mac, Windows and Linux operating systems. The GUI project was specifically created to provide stakeholders with a secure storage unit they had control over.

Cryptocurrency wallets allow you to manage your account and make transactions without having to rely on cryptocurrency exchanges to access the blockchain.

Desktop wallets are password protected but it advisable that users take other precautions as well such as installing anti-virus software on your device to protect your computer from malicious malware that can take over your hard drive and allow cybercriminals to hack you Monero account.

Monero claim developers are working on a dedicated hardware wallet customers can use to store coins. In the meantime, the only official option is the GUI wallet. If you need guidance installing Monero’s desktop wallet, follow this tutorial.

As mentioned above, projects to integrate Monero with third-party wallets are in the pipeline. At the time of writing, several announcements have been made (Ledger Nano S, Trezor and Exodus), but to date, nothing has been confirmed.

And it’s difficult to say whether any of these projects will bear fruit. Given Jazz tried and failed, other companies will encounter similar problems.

Monero’s blockchain technology is focused on privacy and security, Jaxx said they were unable to access critical information that would allow their wallet to send transactions.

The most likely candidate to succeed in creating a hardware wallet for Monero is the Ledger Nano S as the Monero team has officially announced they are working on a project to develop a compatible wallet with Ledger.

The only other option is freewallet.org, but this has been getting some bad reviews, so we are unsure how legit the wallet is, thus have not included it in our review of best cryptocurrencies wallets for Monero.

Before buying cryptocurrencies and cryptocurrency wallets, always perform due diligence before downloading anything.

If you need more information on Monero, read our Guide To The Monero Coin.

How To Store Monero Offline?

Distributed Ledger Technology: The Secret Technology Beyond The Blockchain