We have only recently got used to blockchain technology and cryptocurrency as a new technological revolution. And I think we could all agree that the vast majority of the audience is not ready for another, even more complex, technological advancement.

Saying this, a hot cryptocurrency has recently started climbing the market – IOTA. Except, it’s not as much a crypto-coin but an improved version of blockchain technology.

Currently, the matter of how to buy IOTA is still unclear for many – at the very beginning, only Bitfinex was trading IOTA. Currently, you can also buy it from Binance in exchange for another cryptocurrency. There are several other exchanges that trade IOTA, but these three are the biggest in terms of volume and reputation.

IOTA probably deserves the title of one of the hottest cryptocurrencies of 2017 – it went up in price by over $2 and is predicted to reach $3 by the end of the year.

Apart from that, the IOTA foundation has partnered up with Bosch and Microsoft, adding the same an extra value.

Find out what’s the buzz about and what makes IOTA so special.

IOTA is a new cryptocurrency that aims to establish itself as the fuel for efficient machine-to-machine (M2M) transactions. The main purpose of IOTA is to serve the machine economy by enabling feeless M2M payments.

Often wrongly considered as another altcoin, IOTA revolutionises the blockchain technology by… not using the blocks. It goes beyond the blockchain.

It’s an open-source, decentralized cryptocurrency, engineered specifically for the Internet of Things. Focused on real-time microtransactions and providing the intelligent ecosystem with:

IOTA was born in 2014 in a small team of developers who were building new microprocessors for IoT and distributed computing.

The backbone of the M2M economy are microtransactions, but they come with high fees, flexibility, and blockchain scalability problems. To solve this issue, machines would have to trade resources effectively and securely on-demand.

To do that, the blockchain technology as we know it is not enough, hence there was a need for a new platform – Tangle.

This is how traditional blockchain technology works:

Tangle, however, retains the blockchain features of the distributed ledger and secure transactions, but it doesn’t work with blocks. Instead, it uses a Directed Acyclic Graph (DAG).

Don’t bother too much about remembering the name. The important part is that DAG is what enables zero-cost transactions, unlimited scalability, and offline transactions. Things that blockchain hasn’t been designed for.

In the blockchain technology, miners verify transactions. In the Tangle, each transaction forms a block which verifies itself. Blocks verify each other and themselves and no miners are involved. In order to successfully conduct a transaction, you have to first randomly verify two other transactions in the network.

What’s more – you can verify the transaction with a very simple version of proof-of-work, unlike the expensive mining equipment, so one could argue that transactions aren’t zero-cost.

In Tangle, both users and validators are one and the same.

Thanks to Tangle, IOTA created a self-sustainable economy that is based on demand. There is a cost to every transaction, but it’s paid to verify other transactions and it’s minuscule compared to Bitcoin and most cryptocurrencies.

One of the biggest issues of blockchain technology is scalability – once it’s designed for the particular cryptocurrency, it cannot grow more. We’ve experienced it in a hard way with Bitcoin, which had to split into two currencies due to capacity. The larger the demand, the less Bitcoin’s blockchain could keep up to.

Another innovative feature of Tangle is the ability to carry out offline transactions. Nodes can connect to the main network at a later time, without losing any of the data.

Read more about the Tangle technology.

All IOTA tokens were pre-mined so no mining is required and no more new coins will be added to the system. There were 2779530283277761 IOTAs created.

According to the CoinMarketCap, IOTA fluctuates between 5-10 place, behind some of the most important currencies such as Bitcoin or Ethereum.

Between August and December 2017, IOTA has significantly grown in price, from the mere $0.20 to almost $3.

How Can You Use IOTA

It’s simple to understand that IOTA is going to revolutionise the blockchain sphere, but none of the cryptocurrencies would be useful if there’s no use of them in real life.

The primary use of IOTA is within IoT and machine payments. For M2M to work and being able to exchange information, with the payment, and without human interaction we need sensors.

Some of the areas where IOTA can be used by:

Similarly to e-voting, IOTA can also be useful in e-health and keeping our medical records on a public ledger or connecting vehicles and in a supply chain.

Where To Buy IOTA

The only exchange that supports trading IOTA for fiat currency is Bitfinex (BFX) – a Hong Kong-based exchange, specialising in trading.

Bitfinex supports USD as a fiat currency but you can easily exchange Bitcoin or Etherum into IOTAs in less than a minute.

If you don’t have an account with Bitfinex yet, here’s how you can create it: 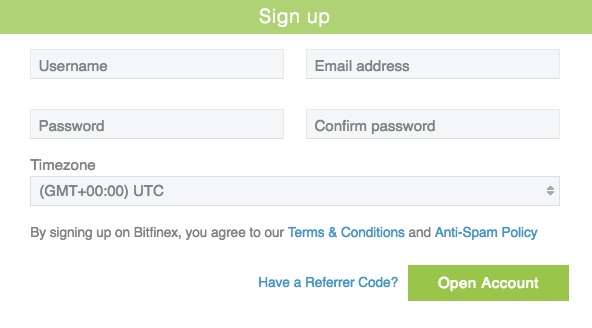 #3 Set up a 2F authentication which will improve the security level. You can do it underneath ‘Security’ settings (the small icon in the right top corner).

#4 Your wallet will be empty at the beginning. You can make a new deposit directly with Bitfinex or transfer funds from another cryptocurrency wallet. A cryptocurrency transfer should take approx. 20mins, while a bank transfer could take up to a few hours or days, depending on the bank.

You have a choice of three wallets: exchange, margin, and funding. To buy IOTA, you have to transfer the funds into the exchange wallet. 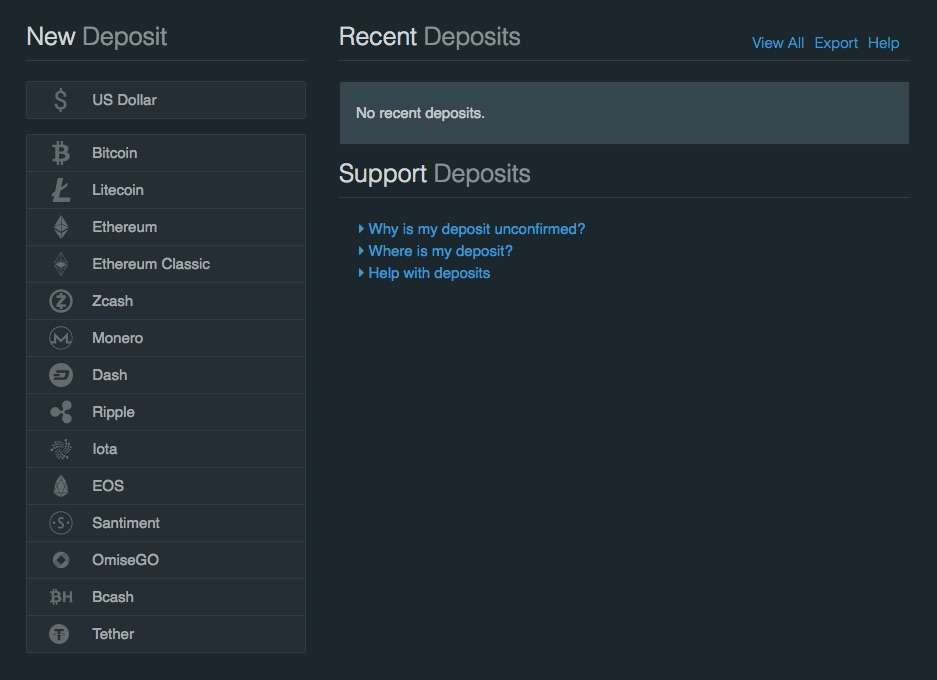 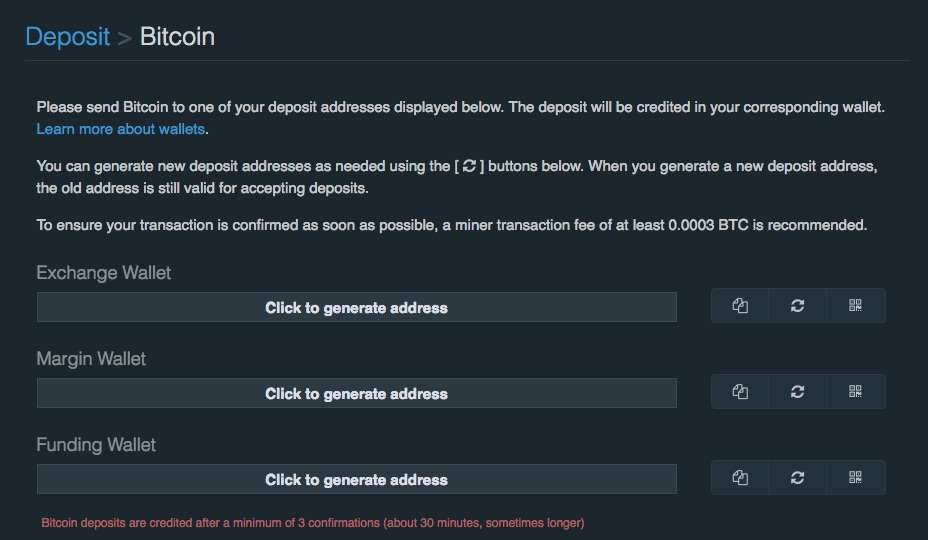 #5 As soon as the funds arrive at the Bitfinex wallet, you’re ready to trade. Depending on a chosen cryptocurrency, the transaction time might be longer due to mining time.

How To Buy IOTA

Great! Your account is set up, you have the funds in your wallet, so you can move on to trading:

#1 Choose ‘Trading’ from the top bar and click on ‘IOTA’. Here, you have a choice of whether you want to trade it with USD or BTC. 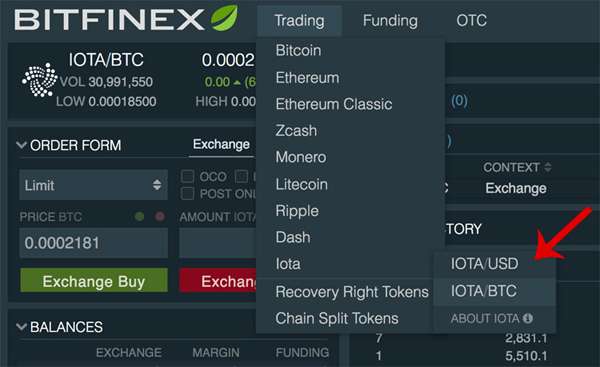 #2 As soon as you open the ‘Trading’ tab, a new left sidebar should pop up with all the details you need for the trade.

While it looks confusing, there are actually only two things you have to do: 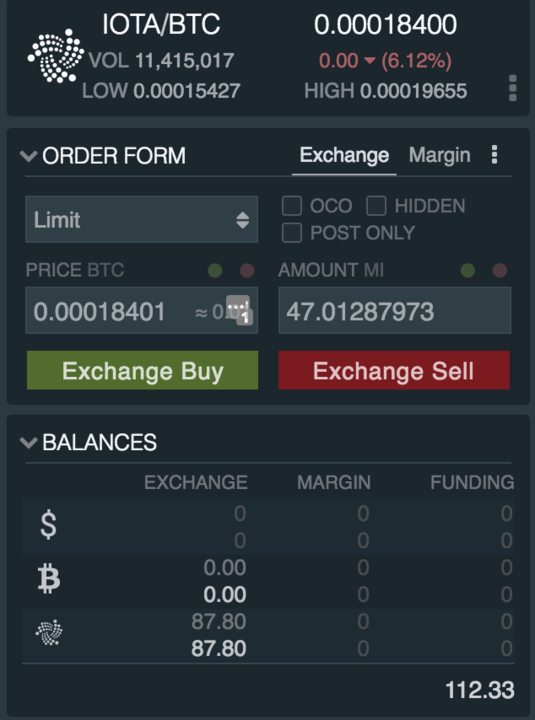 #3 Click ‘Exchange Buy’. That’s it your request has been sent. You should see this message on your screen and IOTAs should be available on your account within seconds.

#4 Make sure not to leave any of your fiat currency or cryptocurrency on the exchange. As soon as you receive IOTAs, transfer it to your IOTA wallet to keep them safe!

If you’re not sure about the wallet, check our guide on how to create the IOTA wallet.

IOTA In The Future

Without a doubt, IOTA is one of the most exciting ICOs that has happened recently. It looks beyond the cryptocurrency scope and focuses on blockchain technology and how it can be applied within IoT.

Enabling quick and free M2M transactions as well as equipping sensors with more data reading capabilities will allow the next stage of IoT to be finally introduced.

If you’re looking for an investment that will pay off in the future and at the same time you want to believe in the technology, you should keep an eye on IOTA.

And if you’re really into this technology and want to find out more, make sure to follow IOTA thread on Reddit where you can find the latest information.

Hopefully, the matter of how to buy IOTA will become easier with the growth of the cryptocurrency. At the moment there is only one exchange that facilitates IOTA and their own wallet.

However, with the prediction of IOTA introducing smart contracts integration in the future, the price will definitely keep on growing.