While Ethereum has been attracting crowds and earning plaudits, another blockchain project is working quietly in the background.

Given controversy is never far away in crypto community circles EOS coin is being viewed with some disparity.

According to some quarters, the EOS blockchain has the potential to be the most powerful blockchain on the planet. The doubters are not convinced.

EOS coin is a smart contract platform that has been described as “Ethereum on Steroids.”

The platform aims to build a decentralised application that will resolve many of the issues other blockchain have not mastered.

Some of the claims made by the proponents behind the EOS coins project claim the platform has a blanket solution to the issue of scalability, can process millions of transactions per second and has eliminated transaction fees.

But can it work?

In this article we will discuss:

The principal ideas behind EOS coin are precisely what the cryptocurrency community want to hear.

However, there is one major sticking point; other than a white paper and a marketing campaign to create a buzz, EOS coins is mostly conceptual.

The best way to describe the EOS blockchain is to compare the platform with an operating system like Android or iOS. Developers then use the platform to build decentralised tools and applications which can be purchased by other users to develop their projects.

The makers of EOS also claim the blockchain can process millions of transactions simultaneously.

If this is true, EOS wipes the floor with anything that currently exists including Ripple and the Lightning Network, both of which can process transactions at hundreds of thousands per second.

EOS coin will also work on the principle of smart contracts in the same way as Ethereum, and will mostly eliminate transactions fees – but only for developers that contribute to the ecosystem and are rewarded in EOS coin currency.

Who Is Behind EOS?

The team behind the EOS project call themselves block.one and are fronted by Dan Larimer, the co-founder of the Steem social platform and the creator of cryptocurrency platform, BitShares.

While Larimer has had resounding success in other cryptocurrency projects he has been involved in, he has considered something of a maverick in the community and some crypto commentators are sceptical about his latest venture.

The root of the objections come from the scarcity of information.

The white paper does not go into specifics and thus far the block. One team has only addressed the challenges without answering technical questions.

Larimer has also been accused of not knowing what the applications are on the basis there is no software yet.

Industry pundit and software developer Chris DeRose has called out the EOS project, describing it as “audacious” and a “Ponzi scheme.”

Larimer has also been accused of bailing out of other projects he has been involved in.

Arguably this is harsh, and as the man himself explains, BitShare and Steem were:

“started with the intention of leaving it to build a smart platform. I was just the person who conceived the idea and set the thing in motion.”

So Larimer is an ideas man, but he seems confident he has a team behind him that will deliver the EOS coin promise.

In fairness, both Steem and BitShares are still building keen interest on the foundations Larimer laid.

Furthermore, Larimer’s involvement in his two previous projects provided a solution to core problems that had previously inhibited the commercial value of blockchain applications.

BitShares delivered horizontal scaling which increased transaction speeds to over 100,000 per second which Steem lowered transaction costs by providing a means for users to interact with applications without incurring third-party fees.

It’s fair to say that Larimer has a track record of innovation that has a positive and significant impact on the blockchain.

EOS coin could be another game changer and the most crucial project that bags Larimer a hat-trick.

If he pulls this one off, not only will he silence his critics, he can take the ball home.

The Potential of EOS Coin 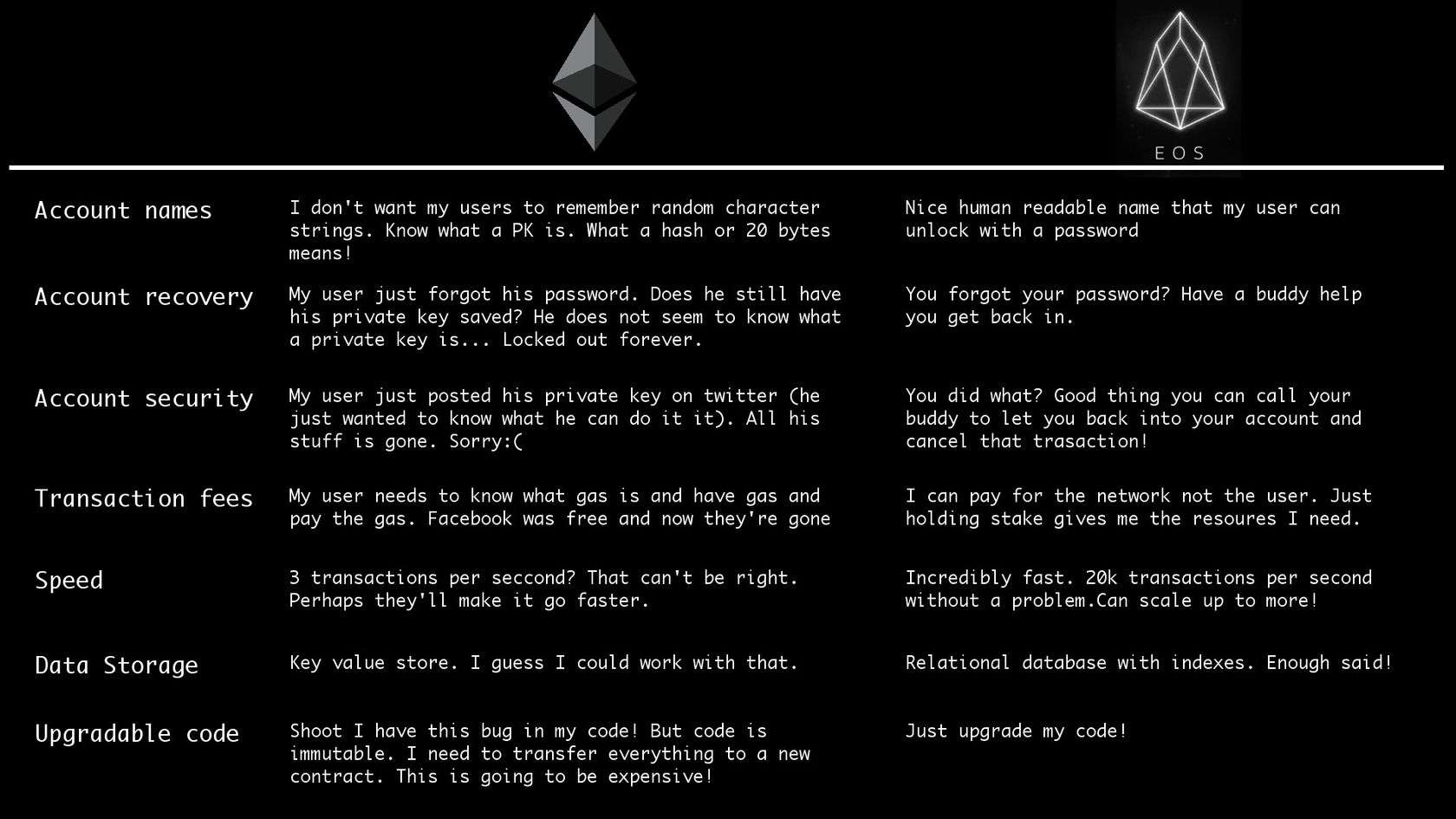 EOS coin may only be a conceptual idea, but there are plenty of investors in the cryptocurrency community that has faith in the project.

Shortly after launch, the price of EOS coin increased by 200% in a few hours and reached a record value of US$150m in just five days.

What one of the principle benefits EOS seeks to achieve is streamlining the ‘proof-of-work’ system to make it less resource intensive.

The current system requires every node on the blockchain network to validate a block, and the energy needed to power these computers use an immense amount of electricity.

Most cryptocurrencies rely on miners to create blocks in return for digital tokens and a small transaction fee.

EOS coin implements a system whereby only one proof-of-stake is required. This will make blocks much shorter, more energy-efficient and deliver faster processing times.

Although Larimer’s delegated proof-of-stake (DPoS) consensus protocol does provide a solution that resolves many of the issues that limit other blockchains, it will also divide community opinion.

One of the major benefits of the blockchain is to create a decentralised system that removes the monopolisation of power from on entity or a conglomerate of businesses that call the shots.

Larimer’s DPoS can be likened to a Republic.

Although there is still a committee watching over activity within the blockchain, it will be easy for a group to take control of the system – just as corporate lobbyists have power “democratically elected” governments.

The potential impasse is certain to cause a furore, but if EOS provides solutions other blockchains cannot deliver, the broader community view fighting for transparency and fairness will have to sacrifice widescale decentralisation for functionality.

However, EOS Coin still has everything to prove before we can even start that conversation. Expect this debate to get hotter.

Where To Buy EOS?

#1 Create an account by filling the form on the Binance registration page. You only need to enter a valid email address and a secure password.

#2 A confirmation email would be sent to you to confirm that you registered on the platform. Login to your mail and activate your account. This verifies your registration and gets your process of acquiring EOS tokens started.

#3 To be able to exchange cryptocurrency for EOS, you first have to own some. If you don’t, you have first to purchase Ehereum and you can o it via Coinbase.

#4 Click on FUNDS and then the DEPOSITS WITHDRAWAL at the top of the page.

#5 Click on the DEPOSIT button in front of Bitcoin and wait for the Ethereum wallet address to be generated. Send your Ether tokens to the address that has been created.

#6 Click on the EXCHANGE link beside the Binance Logo, then select the Basic link option that appears. In the top right corner, you can see all the exchange pairs, locate the EOS/ETH pair.

#7 At the BUY section, you will see three fields:

#10 The coins should take a few minutes to be visible on your account. Afterwards, don’t forget to transfer the funds to your Ledger Nano S wallet.

What do you think of the EOS Coins? Do agree with the scepticism? Let us know in the comments below!

DASH Coin: The Digital Cash of The Cryptocurrency World

What Is NEO Coin?

Tron Coin (TRX): Everything You Have To Know About The Coin That Took The Market By Storm